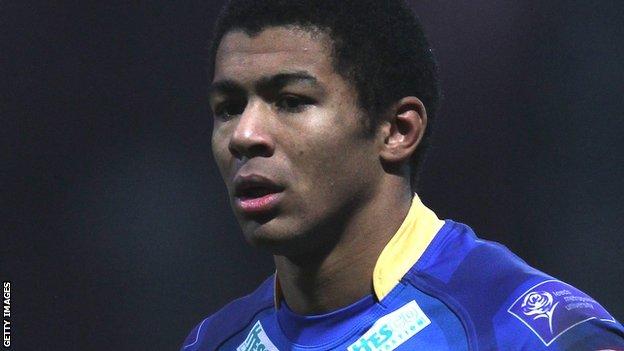 Bradford, who lost for the first time since going into administration, had a 3,500 following after Leeds opted to return away-ticket sales to the Bulls.

Elliott Whitehead's try put the visitors ahead, before Watkins went over either side of half-time.

Shaun Lunt's 100th career try was added to by Zak Hardaker, Danny McGuire and Kevin Sinfield, with Olivier Elima and Karl Pryce going over for Bradford.

It was the Bulls who began the scoring in the fourth minute with a sparkling 60-metre move.

A first try of the night for Watkins helped level the score at 6-6 at half-time, and he scored again six minutes after the break following Hardaker's defence-splitting pass.

Lunt swooped onto the loose ball for his landmark score before Sinfield, who landed four out of his five conversion attempts, was sin-binned on 67 minutes for tackling a Bradford player off the ball.

Hardaker and McGuire scored second-half tries for the hosts, while Elima and Pryce went over at the other end.

And Sinfield returned to the field to score the final try of the night with a minute remaining.

"We had to work hard for the win, which was to be expected against Bradford.

"After last Saturday, we were on the crest of a wave and it was quite emotional through the week. I thought it would affect us but I thought we pushed through real strong.

"I thought the score didn't reflect how hard the game was.

"Unfortunately we came up with errors at crucial times and it cost us six points each time.

"I'm still here so I might as well just drive into work as sit at home."