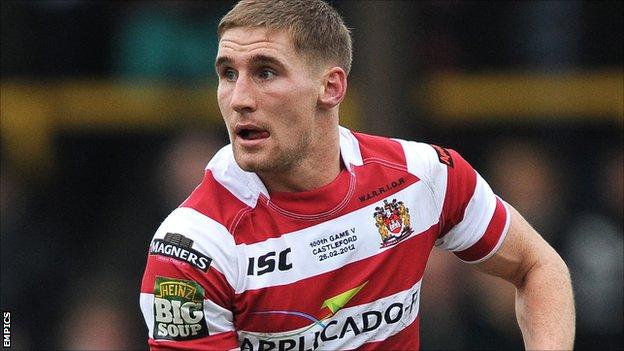 Sam Tomkins inspired Wigan to a comfortable victory against an out-of-sorts London Broncos.

Michael Robertson scored for London, but it was a harsh reminder of the job ahead for interim coach Tony Rea.

Rea arrived in London last week from Australia to retake the reins at the Stoop for the first time since 2006 after Rob Powell was relieved of his duties.

The scoring got underway within two minutes as Tomkins exchanged passes with Charnley to scamper over.

Charnley himself added the second courtesy of a defence-splitting pass from Darrell Goulding.

With half-time approaching the Warriors upped the tempo and it was Tomkins again who rounded off a flowing move.

Minutes after the interval Thornley romped over after another clever pass from Tomkins.

Tomkins also set up the next score for Smith with another incisive break.

The full-back then scored his third try before Brett Finch cantered through a huge gap in the London defence to touch down at the posts.

There was further bad news for the hosts when Dan Sarginson was stretchered off with a leg injury, but seconds later the Broncos did have something to cheer when Robertson crossed.

Tomkins was still not finished, chipping through and gathering his own kick to notch his fourth shortly before the final whistle.

Rea reiterated after the game that he does not want the permanent Broncos job.

"Everyone had a lot of expectation today hoping that the change (of coach) was going to be the difference. I can see a lot of problems so the real challenge now is to prioritise and come up with solutions.

"The answers have got to come from within. You have to be honest and we are clearly not performing the way we want to be together.

"They are better than what they are doing. There are things I can see that have the potential to make a difference.

"I need people to commit and buy into that as well. We need the set-up pulling in the right direction."

"Sam Tomkins is Sam Tomkins. I have seen him play now for too many years to be surprised by what he does.

"His desire to win and compete is excellent, and he impresses me every time he goes out onto that pitch.

"I was quite happy with how everything went and I was very pleased with the defence - it was job done in my book."