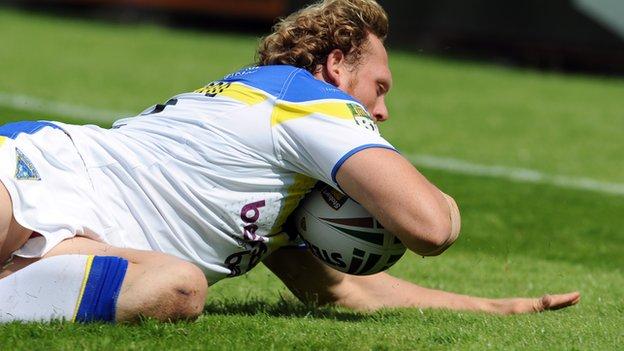 Ben Westwood scored two tries for Warrington as they beat Castleford despite a rally by the hosts.

The Wolves led 30-0 at the break, and 34-0 after 53 minutes, thanks to Westwood's brace and Joel Monaghan, Ryan Atkins, Chris Riley and David Solomona all crossing.

Nick Youngquest (2), Rhys Williams, Richard Owen and Lee Mitchell all went over for Cas to make a game of it.

I don't think there was any complacency out there, more momentum of games, and they started to get their share of the ball in the second half

But Stefan Ratchford scored a late try to seal the game for Warrington.

Second-placed Warrington looked like they were going to cruise to victory in the first half as Westwood went over unchallenged and Monaghan strolled over for a simple touchdown.

Richie Myler's brilliant break put Atkins in and Westwood got his second after more good work from Myler.

Riley added a fifth try just before the break, Brett Hodgson keeping up his 100% record with his boot to bring his personal tally up to 10 points.

It was looking no better for the Tigers after the break when Solomona increased the visitors' lead.

But then the flow of the game changed with Youngquest taking on Danny Orr's kick for Cas's first points.

Williams then broke away to score against his parent club and Rangi Chase, whose move to Hull FC fell through on Friday, weaved his way through the Wolves defence before brilliantly finding winger Youngquest, who scored his second try of the afternoon.

The tries kept coming and Owen ran in under the posts, before Mitchell brought the deficit to eight points.

However, Ratchford ran clear late on to kill Castleford off.

"I'm OK with my boys, I've just told them that. We've had a rough couple of weeks, both physically and mentally. I'm pleased with the victory, and we'll go and review the game like we normally do, and try to reproduce the things we've done well today.

"I don't think there was any complacency out there, more momentum of games, and they started to get their share of the ball in the second half.

"I thought Richie Myler had a good game out there today. He had some energy and focus, and he looked really sharp. He certainly put his hand up today, as we've got a few boys vying for those spots, and Richie did well today."

"The first half was quite frustrating, we came close to scoring on a couple of occasions, and the difference between the two teams in the first period was their clinical finishing.

"I thought in the second half we had a good attitude, good intensity, and we executed some really great tries, and that's the difference. But I thought we did some good things, and I'm proud of how the players came out for the second half.

"Rangi's job is to play rugby league, and he did that to the best of his ability today. He kept trying, just like everyone else out there. He created plenty of opportunities in the first half too, which unfortunately we couldn't take advantage of."