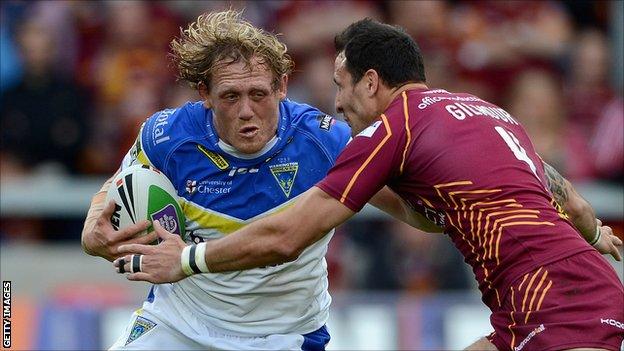 Ben Westwood has said Warrington are now focusing on ending the season first or second in Super League after booking their place in the Challenge Cup final.

The Wire play five league games before facing Leeds at Wembley on 25 August.

"You get the home advantage in the play-offs and that's massive, especially for us with the amount of fans that we get," he said.

"It's like an extra man on the field for us.

"We're in a good position. We haven't been playing that well all year, compared to last year anyway.

"But we're in the Challenge Cup final, we're second in the league and we've still got Wigan and St Helens to play, so we're in a good spot."

The 33-6 victory over Huddersfield Giants on Sunday guaranteed Warrington a spot in the Challenge Cup final for the third time in four seasons.

"We're glad that we've got it out of the way and we're at Wembley," added England international Westwood. "It's exciting times for the players and the town.

"We've got five weeks now to concentrate on Super League."

The first of Warrington's seven remaining league fixtures is a trip to Castleford Tigers on Sunday.

"Castleford had a really good win against Huddersfield last time out so they'll be on a high," continued Westwood. "We'll be on a high as well so it should be a good game."