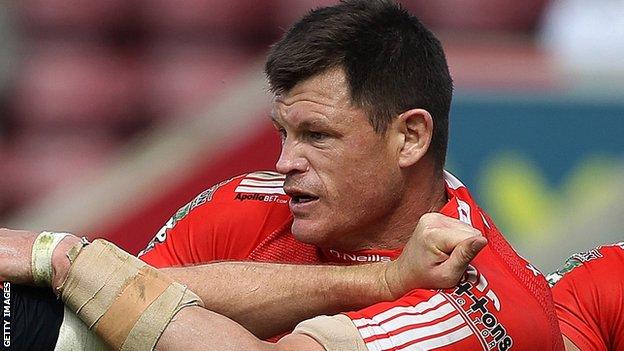 Widnes prop Ben Cross believes the club are going in the right direction after their recent performances.

The Vikings won three of their last six games to move off the foot of Super League and clear of London Broncos.

"The last couple months of footy have been really good," the 33-year-old told BBC Radio Merseyside.

"We're recruiting right; we've re-signed myself, Steve Pickersgill and a few others so it's setting up a good platform [for next year]."

He added: "We've shown that we can play some good football and it's just nice being in that position."

It's not there with the NRL that's for sure, it's just little bits and pieces of the game

The former Melbourne, Canberra and Newcastle forward has missed only two games for the Vikings this year and scored his first try in 125 senior games in the win over Huddersfield in June.

Although he has been impressed with the standard he has encountered in Super League, he believes there is still away to go if they are to catch up with the game in Australia.

"It's not there with the NRL that's for sure," he stated. "It's just little bits and pieces of the game."

"I believe we need two referees out on the field.

"I was a little bit against it when it first came into the NRL but once you started playing under it, it was a really good structure and you actually started to give away fewer penalties because the referees would talk to you in the ruck.

"The game became a lot cleaner and it sort of speed it up a little bit so I didn't mind that sort of style of play with the two referees."