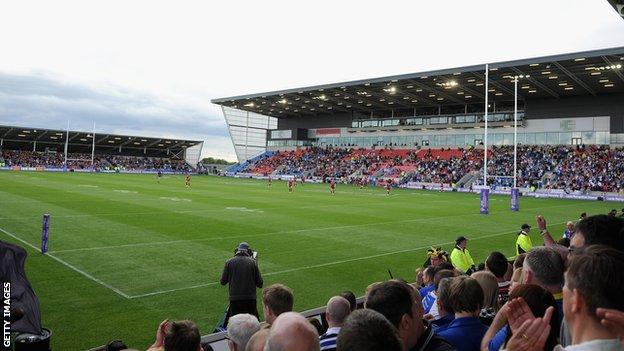 Salford City Reds chairman John Wilkinson has dismissed rumours that the Super League club are close to going into administration.

We've lost some income streams but as a club we're stable

But when asked about administration, he told BBC Radio Manchester: "It's hard, but no, we're not (close to it)."

The Reds were late paying off a tax bill in April and released chief executive David Tarry in June.

Before moving from their former home at the Willows to their new £26m stadium in Barton at the start of the season, the Reds had stated that they needed to average around 8,000 fans at the Salford City Stadium.

So far this season, they are averaging just under 6,000 per game.

"We've got a transformation from the Willows to the new stadium, we've lost some income streams there is no question about that but as a club we're stable," Wilkinson added.

"At the new stadium we've said all along we need 8,000 supporters and we need to have our dining room full as well, as we've not got any other way we can earn our money.

"We're going to look at things differently next year, but we need more than that if we're going to go forward, and that's what we've got to aim for."

Premiership rugby union side Sale Sharks will join the Reds at the Salford City Stadium for the start of the new season, playing their first home game against Saracens at the beginning of September.

And with Sharks chief executive Steve Diamond confident they will reach their attendance target for the season of 7,500, Wilkinson is hoping to tap into their supporter base.

"Sale is Sale, Salford is Salford but I do believe there will be some things that we can work with them on," he added.

"They're trying to tap into our supporters to give a good price on the season tickets, and we could do the same on our side to lift our numbers up.

"We've got to see what happens when they get here and see what goes from there."