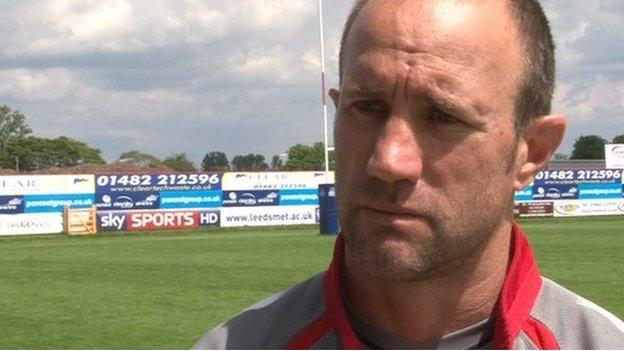 Hull KR boss Craig Sandercock was unhappy with his side's lack of enthusiasm in Monday's derby defeat by Hull FC.

The Robins were beaten 18-32 and have now lost their last four matches.

"We weren't enthusiastic enough, especially in the first half," he told BBC Radio Humberside.

"I need to have a look at the video but we've been flat for our last two matches now and we need to look at why that is."

Defeat by their local rivals means the Robins remain in ninth position, three points behind Huddersfield, who currently occupy the final play-off position.

Sandercock's side, who were missing outside back Craig Hall because of a hamstring injury picked up in training, now look like they will be without full-back Shane McDonnell and forward Con Mika after they picked up injuries in the game.

"It looks like Shane has a medial knee ligament injury so that could be four to six weeks out for him," he continued.

"Con Mika has torn a hamstring so he's definitely out for next week. It's unfortunate because I thought he was our best player by far."