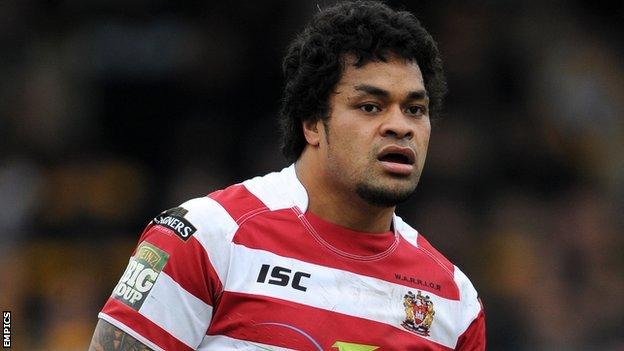 Wigan moved five points clear at the top of Super League with a comfortable but stuttering win over Castleford.

Warriors raced to an early lead through Epalahame Lauaki (2) and Ian Thornley but Rhys Williams struck back for Cas before Liam Farrell went in for Wigan.

The Tigers struck first after the interval through Olly Holmes, adding a late third through Stuart Jones.

But scores by George Carmont, Josh Charnley and two by Sam Tomkins sealed victory over a depleted Tigers side.

The visitors were forced to field a patched-up side after injuries last week to new half-back pair Jamie Ellis and Rangi Chase, forwards Jones and Oliver Holmes filling in at centre and stand-off respectively.

The Warriors were in charge from early on, going 16 points ahead after Lauaki crossed on three and seven minutes, both converted by Tomkins.

For the opening quarter it was all Wigan and they threatened to cut loose and post a big score but the visitors stemmed the tide.

Stout Cas defending allied with deft kicking by Danny Orr - the only recognised half-back in the Cas ranks - managed to hold off Wigan.

Play was suspended for a lengthy delay on the half hour when Darrel Goulding was injured and had to be placed in a neck brace and carried from the field on a stretcher.

Orr soon followed Goulding off the field when he was clattered by Michael McIlorum but Cas enjoyed some reward for their grit and determination when Williams took the ball out wide and drew his man before stepping inside the cover tackle of Tomkins to skip over and Nick Youngquest added the extras.

But after the half-time hooter went some inspired Wigan handling, from right to left and back again, saw Farrell take Chris Tucson's scoring pass after some probing running from Tomkins.

The visitors started the second half the better, adding another try when Holmes beat Charnley to Ryan Hudson's kick through with just four minutes of the half gone, Youngquest adding a second conversion from two attempts.

Cas held out two attempts to bustle over but Carmont hit the play-the-ball at pace, wrestling his way over before Tomkins made it a trio of goals from the tee.

The Warriors full-back then made a telling break and provided the pass to Thornley before supporting his winger to finish off a fine try - but the England man could not add the extras.

Skilful handling from the hosts put Charnley in but Tigers hit back when Jones followed Holmes's example and fell on Hudson's grubber kick.

Tomkins rounded off another impressive display at the death when he picked Harrison Hansen's pass off the floor to score.