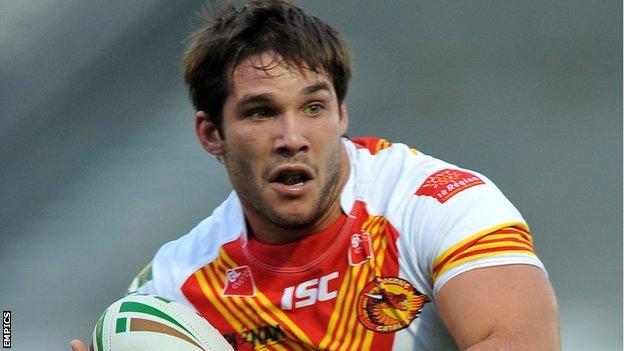 Catalan Dragons moved back in to third in the Super League table with victory over bottom club London Broncos.

The hosts twice came from behind to go in 12-12 at half-time, Jason Baitieri and Ben Fisher cancelling out tries from Tony Clubb and Scott Wheeldon.

Catalan took the advantage after the break thanks to Daryl Millard's try, Scott Dureau kicking his third conversion of the game.

And Dureau's drop goal put the game out of sight for the struggling visitors.

If you're marking us against what we're capable of, then that performance just isn't good enough

Broncos put in a more spirited performance than they have in recent weeks but will be left frustrated after throwing away the lead in a scrappy first half.

After Craig Gower's kick hit the woodwork early on, a flat pass from Chad Randall found Clubb who raced through the Catalan defence to go over, and Gower goaled to make it 6-0.

But the scores were level after Dureau supplied Baitieri and then converted the resulting try.

London retook the lead on after a neat pass from Gower put Wheeldon through another gaping hole in the Catalan defence, and Gower again converted.

Remy Casty thought he had crossed four minutes later, but the try was ruled out for an earlier obstruction on the Broncos defenders.

But they did eventually equalise - Fisher scooting over from the acting half position to score next to the posts, and Dureau kicked his second goal.

In an even tighter second half, it was only Millard who troubled the scorers with his superb solo effort that saw him dance past five players to score on the nod of the video referee.

Dureau added the conversion before landing a drop goal from a tight angle to end the Broncos' hopes of a comeback.

"We're clearly not getting the rub of the green right now. That was a try tonight - I've seen it five times now and it is a try. You just can't get those ones wrong.

"We've had quite a bit of talk with the RFL over the last week, but they need to do something about it.

"They need to express themselves to the public as well. It's not a feeling that decisions go against us, it is statistically weighted against us in the big games.

"We keep working with the RFL and we know that is not an open bias against the club, but there has certainly been some poor decisions against us recently."

"If you're marking us against last week's performance then, yes, it was an improvement.

"If you're marking us against what we're capable of, then that performance just isn't good enough.

"We're not happy and you could see out there that there was a number of opportunities that we threw away."