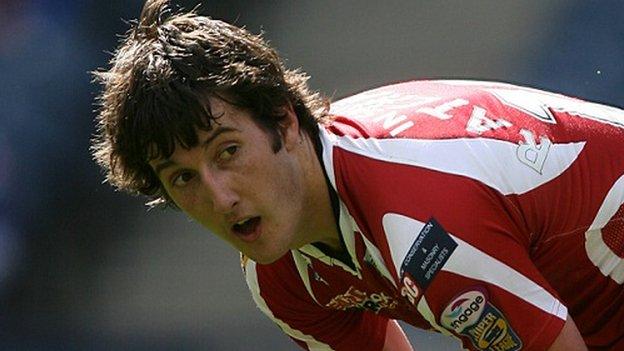 Stefan Ratchford scored four tries as Warrington kept up the pressure on Super League leaders Wigan with a comprehensive win over Bradford.

Joel Monaghan, Richie Myler, Chris Riley, Ratchford (twice) and Simon Grix crossed in the first half before Danny Addy got the Bulls off the mark.

Second-half tries by Addy and Elliott Whitehead briefly raised the prospect of an unlikely comeback.

But David Solomona and two more by Ratchford saw Warrington stretch away.

Victory keeps Tony Smith's men hot on the heels of Super League leaders Wigan, while the Bulls face a struggle to make the play-off places following their six-point deduction.

The Challenge Cup finalists stamped their authority on the game with a try inside the opening minute.

Ben Harrison, Briers and Rhys Evans all handled before sending winger Monaghan over in the corner for the opening try.

The Wolves then took full control with four tries in a brilliant 10-minute spell.

A long Briers pass put Myler over, and that was quickly followed two minutes later when Bradford failed to deal with a Briers bomb and Riley was on hand to score.

Ben Westwood then released Ratchford deep inside his own half, with Myler carrying on the move and returning the ball to Ratchford for a superb try.

Warrington claimed their fifth try of the half when Myler sent Grix over, and more quality passing between Briers, Myler and Tyrone McCarthy allowed Ratchford to claim his second.

The Bulls had the final say of the half when Addy scored during one of their rare forays into Warrington territory.

They then gave themselves hope of a remarkable comeback by scoring two tries within eight minutes of the restart.

Addy plunged over from acting half-back and then Craig Kopczak's midfield break was supported by Whitehead who raced clear to score.

A close-range try from Solomona steadied the Warrington ship before Ratchford sprinted over for his hat-trick.

Ratchford made it four when he took Adrian Morley's pass to complete a superb individual display.

Bradford finished off the scoring when Karl Pryce collected Gale's kick to touch down for a late consolation.

"Stefan Ratchford seems to have found his feet at full-back and, as well as his four tries, contributed really well throughout.

"We have some tough fixtures coming up in Super League and, with Wembley round the corner, we are trying to get everyone in form and playing well.

"In Stefan's case he has got some big shoes to fill in Brett Hodgson's but everyone who comes in has a responsibility to perform."

"I think it is coming to a head all round. A decision will be made in the not too distant future and there have been talks over the weekend. I'm sure it's a priority for both Bradford and the RFL.

"I have had two brief conversations with both sets of people behind the bids and, touch wood, something positive will happen for Bradford.

"The players just kept going, they wanted to play and still wanted to do their best and you only need one slip up in a set against Warrington for them to put six points on you.