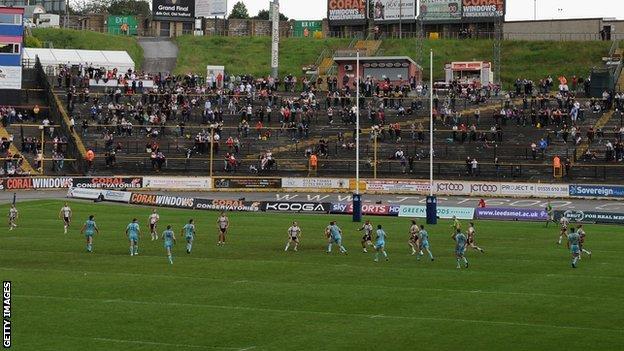 Bradford Bulls have been handed a six-point deduction by the Rugby Football League for entering administration.

The points have been removed from the club's total with immediate effect, meaning they drop outside the Super League play-off positions.

A consortium submitted a conditional bid for the Bulls last week and this was passed to the RFL on Tuesday.

The six-point penalty is two points more than Wakefield and Crusaders were given when they went into administration and is the largest the RFL could have handed out.

Bulls interim chief executive Gary Tasker said: "We expected a deduction of points by the RFL and we of course accept that penalty. We are not yet in a position to be able to offer any recompense to our creditors and as such a six-point deduction was what we expected.

"We are still in the competition and a place in the top eight - and with it the ability to make the play-offs - is still within our grasp and we will be travelling to Warrington on Sunday in a confident and determined mood."

Centre Chev Walker responded to the news of the points deduction by tweeting: "6 points of hard work on the field taken because of sloppy work off it!! Play-offs are still in reach long as we get our heads down."

Administrator Brendan Guilfoyle revealed last week that the bid put forward by the consortium would be conditional on the Bulls being allowed to continue in Super League and lease back Odsal, which is owned by the RFL.

"The best the RFL will get is a conditional bid," he told BBC Look North.

"The consortium I'm dealing with won't move forward with the club in the second tier. It would be a totally different business model.

"If this bid isn't accepted by them then this club will cease to exist and I will have failed."