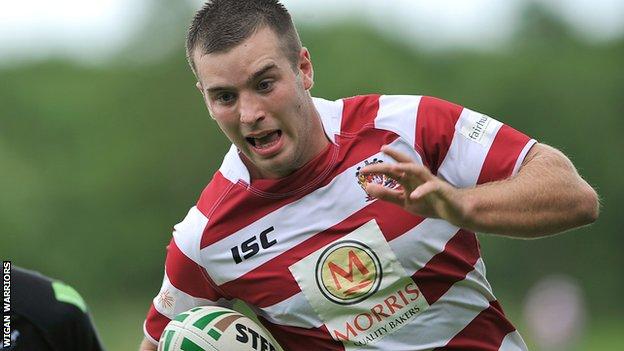 Wigan Warriors centre Iain Thornley says he has enjoyed his return to rugby league after his two-year union spell.

I grew up playing rugby league, it never leaves you so it wasn't as hard to adjust

Thornley, 20, moved to Sale as an 18-year-old after being chased by a number of Australian rugby league clubs.

He returned to the Warriors in May and has scored three tries in his first two appearances back in Super League.

"I've been getting a bit of game time so I'm enjoying giving it a go and being back in rugby league," he told BBC Radio Manchester.

"I was only young when I made the decision but I always wanted a go at rugby union, so I thought while I was young and injury free, it was a good time to have a go at it.

"It was the same coming back; Wigan had shown me an opportunity, a chance that could be there for a solid spot and I decided to take that."

The former England Academy international made just seven Premiership appearances for Sale and spent last year on loan in the Championship at Leeds.

He enjoyed a solid season at Headingley scoring seven tries in his 26 appearances, but returned to the club where he began his career after discussions with Kris Radlinski and Shaun Wane.

"It wasn't that I wasn't enjoying it. I had a really good go at rugby union, I really enjoyed it," he said.

"The coaching staff really looked after me and taught me the game, so I've got a lot of thanks to show them.

"Obviously there was a big transition, it was not so bad because of playing in the backs, it is pretty similar, it's just around the ruck area.

"Coming back it's not too bad because I grew up playing rugby league, it never leaves you so it wasn't as hard to adjust."