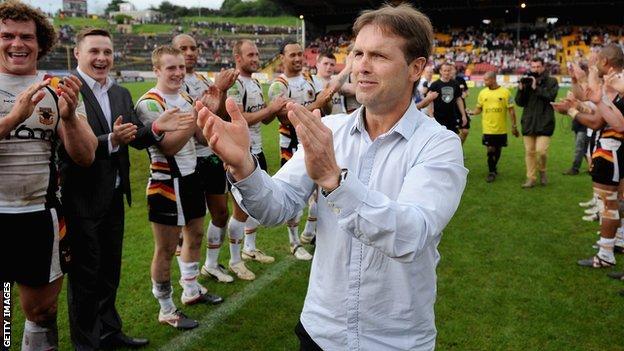 Bradford Bulls coach Mick Potter is not considering applying for the vacant role at London Broncos but is looking for work in his native Australia.

Along with 15 other members of staff, Potter was made redundant at the start of the month and is now working in a voluntary capacity.

"I haven't looked into the Broncos job and I don't plan on doing so," he told BBC Radio Leeds.

"At the moment my options are staying here or going back to Australia."

He added: "I am actively seeking employment there but I haven't heard anything from that at the moment."

Potter is hopeful of staying with the Bulls but the financial situation means he has been left with no alternative but to start looking elsewhere.

"I haven't gone into the hardship fund because I think that there's people more deserving than me," he added.

"At the moment I'm dipping in to the savings."

On Wednesday the Bulls were deducted six points for entering administration and dropped out of the play-off places as a result.

Ahead of the weekend's game at Warrington, Potter is not ruling out the Odsal side's chances.

"We knew the deduction was coming and it's still possible we can make the top eight," he concluded.

"It's tough to keep going over all these hurdles but the players keep fronting up and while there's still a chance, we'll keep trying."