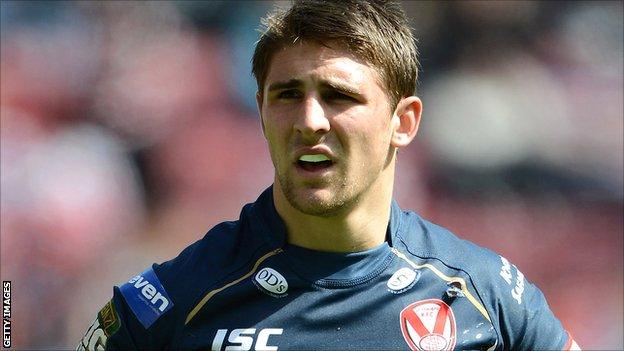 Saints, who have been beaten in each of the last five finals, are currently lying third in the Super League table, having won their last six matches.

"We're having a great run," Makinson told BBC Radio Merseyside. "We've spoken about these last few games and we want to carry it on.

Since winning their last Super League crown in 2006, St Helens have lost four Grand Finals to Leeds, including in 2011, and another to Wigan

"We want to go all the way, like last year, and hopefully go one better."

St Helens have five Super League fixtures remaining and still have to face the top two.

Second-placed Warrington Wolves make the short trip to Langtree Park on Monday, while the regular season finishes with an away fixture at leaders Wigan on 7 September.

Saints have recovered from a slow start to the season to, once again, be one of the main contenders for a Grand Final place at Old Trafford.

Confidence is high within the squad, especially as interim coach Mike Rush does not have any significant injury problems to concern him in the final weeks of the season.

"When Ade Gardner is back, we've got a fully-fit squad," added Makinson, who scored a try and kicked seven goals in Sunday's 46-12 victory over Huddersfield Giants.

"There's competition for places everywhere and the players that are lucky enough to be in the team at the moment have got to earn their place."