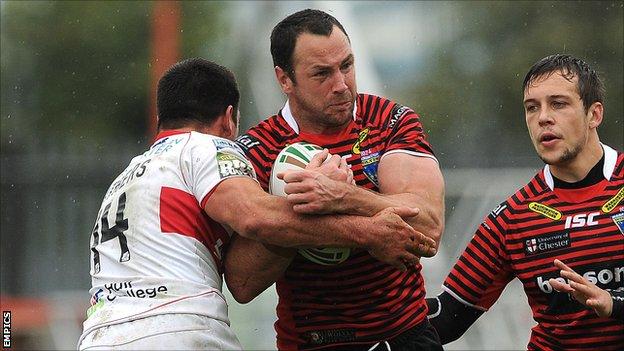 Adrian Morley has said he needed to convince himself he could still perform to a high standard before signing a new one-year deal with Warrington.

The 35-year-old, whose season has been disrupted by injury was on Thursday.

He told BBC Radio Merseyside: "I'm no different from any other player. You want to prove to yourself that you're able to compete at the highest level.

"This year has been frustrating and my confidence took a bit of a battering."

Morley added: "My problems are behind me, I'm playing some decent stuff and the club believe I've got another 12 months left in me."

When the 35-year-old was left out of the England squad to face the Exiles in June, coach Steve McNamara said he wanted to give the prop forward more time to recover from a neck problem.

His return has helped Warrington cement their place in the top two, as well as helping the Wolves back to the Challenge Cup final for the third time in four seasons.

Tony Smith's side closed the gap at the top of the table to just one point with a on Saturday.