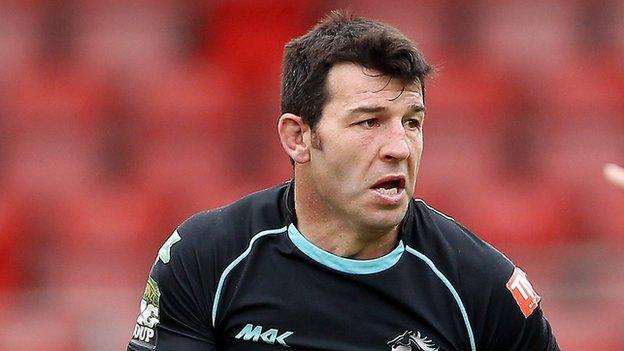 The previous record was at Wakefield in 2006, Warrington coming from 21-0 down.

But Warrington's win is only the best in regular season records, Wigan having come back from 30-6 down to win at Bradford in the play-offs the following season.

There had been speculation that former Great Britain scrum-half Sean Long, now Salford's assistant coach, would make his re-emergence from retirement at The Stoop.

Long, 35, was set to play when Marc Sneyd injured his ankle last Sunday at Hull. But the former St Helens star, who broke his thumb playing rugby union last season, aggravated the injury in training.

The City Reds initially looked as if they needed no extra help in brushing aside a poor home team, despite the Broncos taking an early lead when winger Omari Caro intercepted Luke Patten's ambitious floated pass to run home unopposed.

But Salford hit back almost immediately when Gleeson started and finished their first attack.

Broughton then put Anderson over in the corner before Gibson made it three tries in eight minutes as London's lack of confidence made itself felt.

Gibson then burst through a poor attempted tackle by Caro to extend Salford's growing lead, all four of the visitors' tries having been created down the flanks.

More poor defending allowed Ashhurst to go over after taking Daniel Holdworth's pass and, with London errors piling up, Broughton added a sixth try before the break.

Having clearly had a thorough half-time talking-to by interim coach Tony Rea, London reduced the deficit when Julien Rinaldi's break was finished by Gower.

Gower's high kick then resulted in Clubb scoring from close range to raise the prospect of an unlikely comeback in front of another meagre crowd at The Stoop 1,517.

But it still took an astonishing five tries in the final 12 minutes to bury Salford.

Kieran Dixon was the next to score and, from Salford's short restart, Chad Randall created a try for Bailey which brought London back to within two points.

Gower missed the kick to level the scores, but Michael Robertson stole the ball from Danny Williams in a one-on-one and passed to O'Callaghan to make it three tries in five minutes for the home team.

Lovell then made the game safe before Dorn put the icing on the cake for the Broncos, who all but ended Salford's outside chances of reaching the end of season play-offs.

Salford had won the last six meetings in this fixture, having not lost in the capital since a 34-18 defeat to the Broncos at Griffin Park, Brentford in May 2005.

"We needed players to step up at half-time and, when I saw the glint in his eye, I knew we had a chance.

"It has been a really tough year for the club and people are down about it, so I am really pleased for the players that we came back like that.

"The ambition that everyone showed was great and it is very important that we keep that going for every minute left this season."

"Some of the performances out there were disgusting. There are some players today that need to take a long hard look at themselves.

"At 28-6 at half-time you certainly expect to win a game, but ill-discipline let us down big time.

"I think there is a lot of soul-searching that needs to be done, and we will look at the video and go from there.

"We did not just lose the game, we lost it convincingly, and that is hard to take."