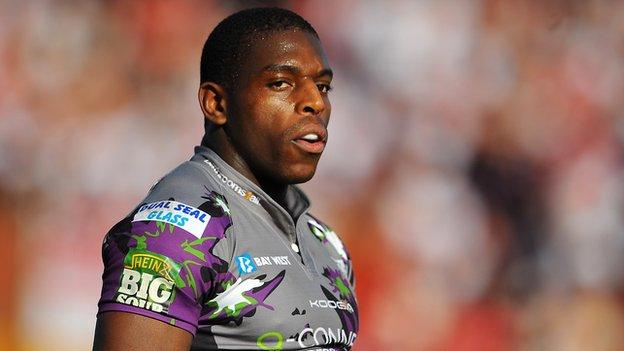 Huddersfield returned to form with a first win in six matches to stay on course for the Super League play-offs.

After two first-half tries from Jermaine McGillvary either side of Remy Casty's opener for Catalans, the Giants scored twice more before the break.

Tries from Scott Grix and Aaron Murphy, with David Fa'alogo and Lee Gilmour both crossing after the break, were bolstered by Danny Brough's six goals.

Both Murphy and McGillvary were returning from injury for the Giants, who stay seventh, still five points clear of ninth-placed Bradford.

It was a first win for new Huddersfield coach Paul Anderson since coming in ahead of schedule to take over from St Helens-bound Nathan Brown three weeks ago.

And it was on the cards from the moment that McGillvary capped a fine start by diving over in the right corner from a flowing move involving Grix and Leroy Cudjoe.

The academy product's second score came after full-back Greg Eden was denied what looked a certain try on the line in the left corner in the 27th minute.

Huddersfield swept cross field from the next attack, with Grix and Cudjoe again involved, to set up McGillvary's ninth try of the season.

Grix, in commanding form at stand-off, then darted between two defenders on the line after 36 minutes to extend Huddersfield's lead before Brough and Gilmour combined on the hooter to put Murphy in for a touchdown in the left corner.

After early second-half scores for Fa'alogo and Gilmour, Millard and Blanch responded.

Scott Dureau added the extras to finish the match, like Brough, with a 100% record, but it was too little, too late from the injury-hit visitors.

It was revenge for the 27-20 defeat in France in May which sparked the run of one win in 10 Super League games which led to Brown clearing his desk early.

And, after seeing his side run in six tries to pull off a stylish victory, Anderson and newly-installed assistant Kieron Purtill are now aiming to keep Huddersfield's renewed ambitions on track with another victory at Salford this Friday night.

"We're confident of making the play-offs. We've just competed against a top three side. When we do what we're good at we've a chance against anybody.

"Just getting a win was the key and I'm delighted with that. But I was disappointed by the last 20 minutes as it got a bit scrappy.

"It's hard to single anyone out as the collective played well in both offence and defence, which is something we can't say we've done in recent games.

"But David Fa'alogo, who came in as a late replacement for the injured Larne Patrick, had a good game. He was due to be 18th man and deserves credit for preparing himself to play."

"The work ethic's been down and the players are going to have to work hard to make sure this is just a two-week blip.

"We improved after the break and we know we can play that sort of footie. But it was the lack of work ethic at the start that was the hardest thing to swallow."