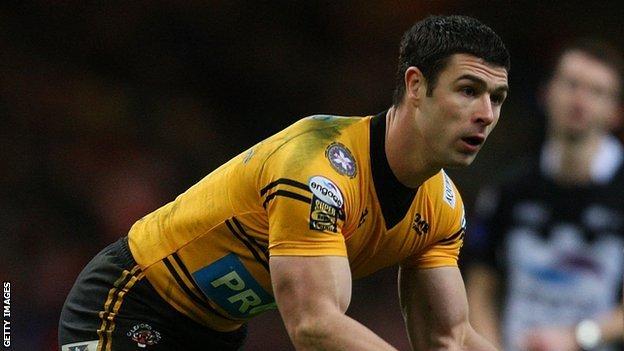 Improving Wakefield kept their outside chances of reaching the Super League play-offs alive with a third straight win at Castleford.

Richie Mathers, on loan at Wakefield from the Tigers, scored two tries against his parent club.

Second-half tries by Paul Jackson and Nick Youngquest were no more than consolation for the outplayed Tigers.

A knock-on by Castleford winger Rhys Williams 10 yards from his own try line led to Wakefield taking an 11th-minute lead.

Lee Smith was halted just short from the resulting scrum before Cockayne forced his way over from acting half.

Wakefield struck again four minutes later when Tim Smith made pace for Mathers to dart over.

Tim Smith then dummied his way through Castleford's flat-footed defence after 35 minutes and home hopes of getting back into the game faded four minutes into the second half when Tim Smith and Kirmond linked to send in Collis.

Kirmond then went over from Tim Smith's pass, and the one-way traffic continued when Lee Smith capitalised on Tim Smith's kick to score, before Castleford finally got a look in when Jackson plunged over from close range.

But the Wildcats had the last word when Tim Smith sent in Mathers for his second touchdown, with Paul Sykes kicking his sixth goal.

"I thought Wakefield were very good. They were by far the better team.

"They outmuscled us and were more physical than us and showed better execution. All their 17 players outdid our 17 players.

"The fact we had eight or nine players out was no reason why we can't control the ruck or drop the ball or give away penalties and things like that. That's a given thing in professional rugby league.

"I know the problem and I get paid as a coach to find the problem but some things you speak to your family about you like to keep private and with my family here I like to keep that private."

"I thought Tim Smith was very dominant and very strong. He pulls the strings for us.

"Perhaps in some people's eyes we took a punt on him but I thought he gave a masterclass at times today.

"We have had three good weeks and to back up after Monday's performance against Leeds was terrific.

"Overall I am very happy with the way the team is performing. They are playing very confidently and I think we've shown over the last three weeks we've really got some quality football in us."