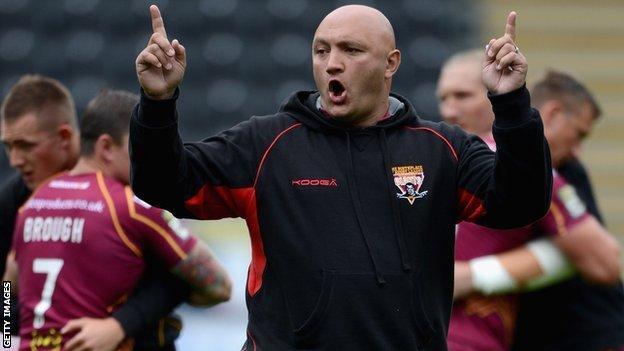 Huddersfield Giants coach Paul Anderson has questioned the commitment and effort of some of his players.

Anderson's side are on a horrendous run of form that has seen them lose 10 of their last 11 games in league and cup.

"I thought we gave in last week," he told BBC Radio Leeds.

"There's some fundamental things that went on last week that were laughable, some of our attention to detail was pathetic, it was as if they'd never been coached."

He added: "You can say we're in a dark place at the moment but what we have to do is get the right effort. I could not say that all 17 of our players tried their hardest last week."

The Giants were beaten 46-12 at St Helens last week and have slipped from Super League's top spot in May to seventh in the table with just five games to go.

Following the defeat by Warrington in the Challenge Cup semi-final, outgoing coach Nathan Brown was sacked and replaced by Anderson but his arrival has failed to halt the slide so far, as they have lost their first two matches under his charge.

Despite their poor run of results, Anderson remains hopeful they can turn things round in time to secure a Super League play-off place.

"I'm confident in this group of players. If they apply themselves correctly then they can challenge," he continued.

"We need to focus on the here and now, it doesn't matter what's gone before. We need to get more consistent in small parts of the game because then the bigger things look after themselves.

Huddersfield take on Catalan Dragons on Sunday, looking for a first win since their victory over bottom side London Broncos on 24 June.