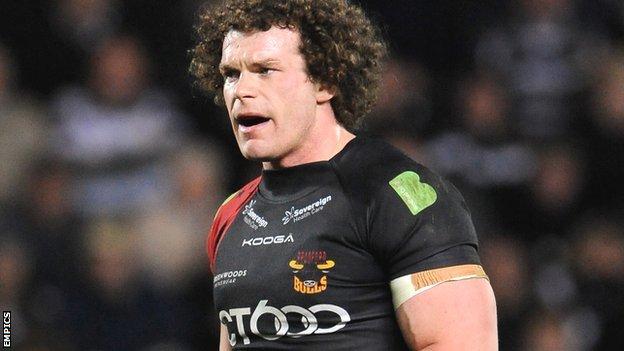 Bradford closed the gap on eighth-placed Hull KR with a hard-fought win.

The lead exchanged hands several times in the first half as Jamie Langley and Shaun Ainscough crossed for the hosts and Scott Taylor and David Hodgson went over for the Robins.

Jason Crookes put Bradford back in front after the interval, touching down in the corner.

Langley's second try and Elliot Whitehead made it safe despite Lincoln Withers and Craig Hall going over.

The game will have come as a welcome relief to Bradford, whose future remains unclear after a week which saw the first unconditional bid submitted for the administration-hit side.

It was a match that the Bulls really needed to win if they were to keep their play-off hopes alive, as they started the match two points behind the eighth-placed Robins with three matches remaining after Friday's encounter.

Having fallen behind to Michael Dobson's penalty, the Bulls went ahead through Jamie Langley's try after a spell of concerted pressure, with Luke Gale adding the extras.

Hull KR went back ahead when Taylor crashed over and Dobson kicked his second goal of the night.

Ben Jeffries showed great vision and composure to find Ainscough in space on the wing and he went over, as the lead changed hands once more.

In an entertaining game, the visitors went into the interval with the lead after Ben Galea broke through and fed Dobson, who laid it off to Hodgson for a simple try in the corner before Dobson landed the conversion from a difficult angle.

After a slow start to the second period it was Crookes who gave the game a much-needed injection of life when he powered over in the corner for a superb try.

This galvanised the Bulls, who were docked six points for entering administration, and Langley grabbed his second try when he bulldozed his way through the Robins defence.

Withers pulled one back for Peter Gentle's side after a period of pressure in front of the Bradford posts and Dobson kicked the extras once again.

Whitehead made the victory safe for the Bulls when he collected Gale's pass and touched down.

Gale converted and then notched a penalty to give the hosts breathing space and meant that Craig Hall's last-second try, converted by Dobson, mattered little.

Hull KR remain ahead of the beleaguered Odsal side but on points difference only.