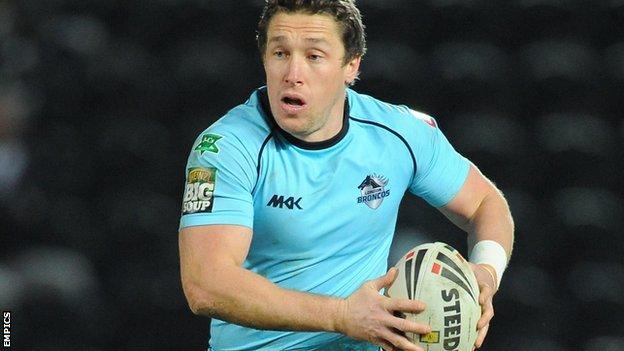 Luke Dorn ran in four of London Broncos' 10 tries as Challenge Cup finalists Warrington were put to the sword in the capital.

Playing a weakened team just a week away from the final, Warrington's plan backfired badly at The Stoop.

Warrington had won their last six Super League games, leading up to last Saturday's 30-10 win over table-topping Wigan, a victory that kept up their hopes of retaining the League Leaders' Shield they won a year ago.

But coach Tony Smith opted to rest his big guns, Lee Briers, Garreth Carvell, Ben Harrison, Brett Hodgson, Joel Monaghan and Ben Westwood all being given the night off.

And, in front of another poor home gate of 2,261 - massively fewer than the expected 80,000 capacity crowd that will watch them take on Leeds 10 miles up the road at Wembley next week - Smith's side paid the price.

They missed out on the chance to go top as they were simply crushed in a second-half onslaught that saw the Broncos run in six of their 10 tries to stick 38 points on Smith's men without reply.

And Dorn was again the main hero, grabbing four tries for the second time in a week, having done just the same at Castleford last weekend.

Dorn did almost the same a year ago when he ran in a hat-trick for Harlequins in another surprise 32-22 win at home to another team of weakened pre-Wembley Challenge Cup finalists, Leeds.

And Wire will now be hoping that does not prove an omen when they face the Rhinos back in the capital next Saturday.

It was a third straight win for new Broncos coach Tony Rea, moving his side up to 12th in the Super League table, on the very day that his predecessor Rob Powell officially parted company with the club.

And it helped make up for the club record 82-6 defeat suffered by Powell's side against Warrington at the Halliwell Jones 17 months ago.

"Results like this do happen ahead of cup finals, but we just want to concentrate on ourselves.

"I think this is a reflection of us at the minute. We have been building things over the last few weeks and we are really in control of what we are doing.

"It was a game for the offload and a broken ball sort of game and we did it well."

"There were plenty of lessons for us out there and we need to dust ourselves down quick.

"It is not the end of the world but we are certainly looking at it.

"This game is all about momentum and when London got on a roll in the second half we just couldn't seem to stem the tide."