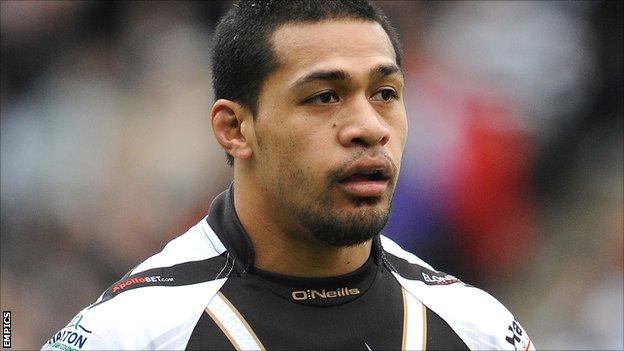 Hull had led 10-8 with tries from Jordan Turner and Joe Westerman, but had no answer to a burst of Widnes scores either side of the break.

Aaron Heremaia's effort was little more than a consolation for the visitors.

Although Widnes have shown a rapid improvement over the past two months, they started the day bottom of the table.

And despite such a convincing win, they are still there with two matches of the regular season to play, but coach Denis Betts and his team can take great confidence from their display, particularly a 20-minute period either side of half time in which they scored 22 unanswered points.

As for Hull, their play-off place is assured, but the expression on the face of their coach Peter Gentle towards the end of the match told a story.

After a scrappy opening, the visitors were able to capitalise on a Flynn knock-on to open the scoring. From their extra set of six tackles, a gap opened up for Turner, who crossed over in the corner.

The Vikings, through Isa, thought they had responded immediately, but the video referee disallowed his effort as he had a foot narrowly in touch.

But the Kiwi did not have to wait long for his first try in Widnes colours.

Visiting full-back Tom Briscoe struggled to collect a high ball in the low sun and the hosts picked up possession, eventually going wide to Isa, who was able to score easily.

From the resulting kick-off, Hull were controversially ruled offside and Widnes profited with a second try.

Flynn, who scored two consolation tries in the 58-10 defeat at the KC Stadium in March, rounded off a good team move to put the home side in front.

But back came Hull, who went ahead when Westerman burst through two tackles to score their second try and Jamie Foster kicked the extra two points.

But former Hull man Shaun Briscoe ensured Widnes would go into half time with the lead, latching onto a low kick and showing some neat handling to touch down under the posts.

And before the interval, from a quick break, Winterstein extended the advantage, racing clear for the Vikings' fourth try.

Craven gave the home side a perfect start to the second half. Willie Manu dropped the ball 30 metres from his own line, allowing the youngster to chase down his own grubber kick and cross for another four points.

Another Hull handling error handed possession back to Widnes and Isa, now with the taste for tries, touched down for a second time after excellent work from Cameron Phelps and Hanbury.

Heremaia put an end to the Widnes try-fest just before the hour mark, crossing over from dummy-half. Foster's kick reduced the deficit to 14 points.

The score seemed to bring Hull to life, but the Vikings were able to hold them at bay and confirmed their sixth Super League win of the campaign when Widnes full-back Briscoe crossed over for his second try of the game.

And an eighth Widnes score of the evening from Hanbury set the seal on a convincing victory.

"Peter (Gentle) may be upset with his players but we got in their faces and forced them into errors.

"Hull could not break us down and we can take a lot out of that performance.

"We miss Shaun Briscoe when he's not playing. He gives us experience. When he's out there I can hear him all over the field urging on his team-mates.

"Willie Isa has really contributed the last 10 or 12 weeks. He has a huge work ethic and his energy is infectious."

"It was disgraceful and the most inept performance I have seen for a long time.

"Our completion rate in the second half was only 39% and we went from bad to worse.

"We weren't anything like a top-four side out there today and are kidding ourselves if we think that.

"We have a lot of work to do. We had no respect for the ball and no defence to back it up. It was embarrassing and not up to standard."