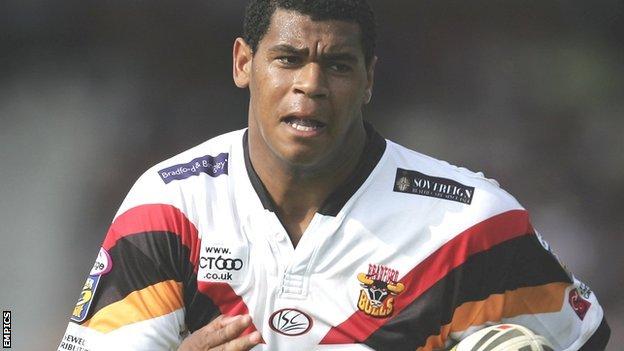 Bradford Bulls moved back into the Super League play-off places as they comfortably beat Huddersfield Giants.

The Giants, who were pushing for a win to secure their place in the play-offs, went ahead thanks to Joe Wardle's try.

Gale kicked a further 10 points, while Huddersfield's Leroy Cudjoe grabbed a late consolation for the home side.

The hosts had won their previous two Super League matches and hopes of a third successive win were high when Wardle collected a Greg Eden pass to cross against his old side after five minutes.

But the lead only lasted for 11 minutes before Ainscough dived over in the corner and Gale kicked the first of his five conversions.

Substitute Diskin burst through midway through the opening half and Gale touched down two minutes before the interval to give the visitors an 18-6 half-time lead.

Huddersfield thought they had reduced the deficit after the break when Jermaine McGillvary crossed but referee Thierry Albert disallowed the try for a forward pass from Cudjoe.

A solo effort from Kearney extended Bradford's lead but there was still time for a consolation try from Cudjoe, who sprinted away from Keith Lulia to score.

Pryce had the last word when he acrobatically collected a pass from Elliott Whitehead to seal the Bulls' victory.

Bradford have moved back up to eighth place, despite having six points deducted for entering administration.

The Bulls are one point ahead of Wakefield and three points behind Huddersfield in seventh with two matches of the regular season remaining.

"It was very poor from ourselves. We came up against a committed team, they committed a lot of pressure on us and we cracked.

"We scored first and everything looked rosy but the rot set in.

"What we need to do is turn up with the right attitude and today we had no consistency, apart from we consistently gave them the ball.

"At times we looked like we had never played together. I'm not amused. We were very average."

"It was a fantastic result for the fans, the players and everyone involved with the team.

"To be in this position with what has happened this season is a fantastic achievement but it might mean nothing if we lose our last two games.

"There's a lot of hard work to do and the players know how hard the next two games will be.

"It wasn't a high-quality game. We tried to play a bit too flamboyantly and were over-zealous with our passing."