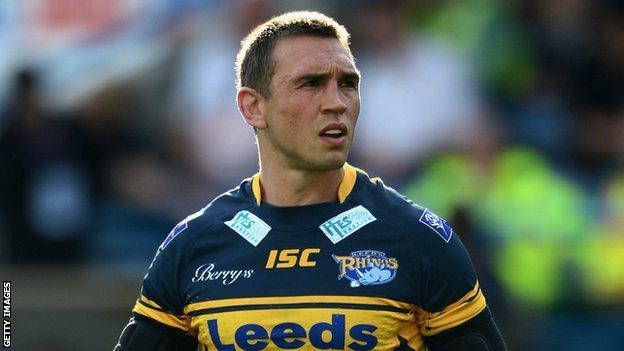 Leeds kept alive their hopes of a Super League qualifying play-off place with an eight-try demolition of Salford.

The Rhinos eased into a 16-0 lead at the break with tries from Ben Jones-Bishop, Ryan Hall and Kevin Sinfield, who also kicked a total of seven goals.

Leeds climb to fourth, but fifth-placed Catalan Dragons have a game in hand.

The Rhinos, beaten by Warrington in the Challenge Cup final last weekend, took the lead when Jones-Bishop slid over in the corner, before Hall took advantage of good work from Rob Burrow to score his 25th Super League try of the season.

Sinfield's try eased them clear before they won the game with three tries within the first eight minutes of the second half.

Burrow jinked his way over for a solo try and Watkins burst over from Stevie Ward's pass before Hauraki cantered in from 25 metres out.

Zak Hardaker's dazzling footwork through the Salford defence teed up Watkins for his second and Jones-Buchanan stretched out of Patten's tackle to claim Leeds' eighth try.

But it was Patten who had the final say by grabbing two late consolations for the City Reds, Daniel Holdsworth converting both.

"Our mentality was big after last week.

"The danger is you pay lip service to getting yourself up to it again after what has been a big emotional week."

"They were pretty good but we were atrocious. I thought we were probably lucky to be only 16-0 down at half-time. It could have been a few more.

"We missed too many tackles. We were embarrassing in defence, I was disgusted with what I was watching. I've told them they need to seriously look at themselves."