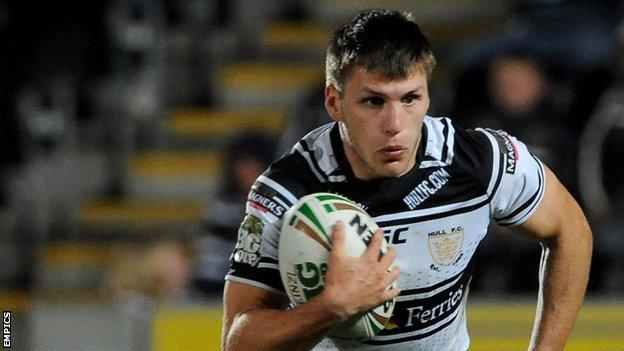 Hull all but ensured a home elimination play-off tie with a 13-try thrashing of Bradford, whose hopes are now out of their own hands.

Jason Crookes gave the Bulls, who were bought by Omar Khan's consortium on Friday, the perfect start.

The victory leaves Hull in sixth place, four points clear of Huddersfield, who play their game in hand at second-placed Warrington on Sunday.

A Wolves win or a draw will guarantee Hull a play-off tie at the KC Stadium, with the Giants their likely opponents.

But the Bulls, who have kept their play-off challenge alive despite being in administration since June and being docked six points, must rely on Wakefield slipping up in their final two games if their season is to be extended.

The Wildcats host bottom-of-the-table Widnes on Sunday and end their league campaign against another team with nothing but pride to play for in Salford on Friday, with the Bulls facing Catalan Dragons in Perpignan the following day.

The result certainly dampened the celebratory mood at Odsal, with new owner Khan and Bradford South MP Gerry Sutcliffe given a rapturous welcome before kick-off.

But the Bulls ended up suffering their biggest defeat of the season as their three-match winning run was brought to a halt.

After Crookes has touched down in the corner to give Bradford an early lead, Hull took full advantage of the Bulls' Ben Jeffries being sin-binned by scoring twice through Westerman and Foster.

It was a lead they extended with three more tries before half-time, two of them scored by Manu, who also made the break for Houghton to cross.

Two more tries followed within six minutes of the restart as Heremaia finished off a break by Richard Horne, before Crooks sent Briscoe over.

Briscoe, Lynch, Heremaia and Foster all crossed in a one-sided finale, before Briscoe raced clear to complete his hat-trick with the last move of the match.