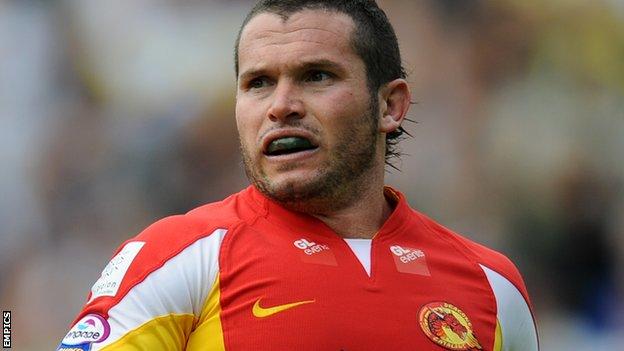 Blanch led the way with two of their five tries in the opening half, with Ryan Hudson and Stuart Jones replying.

Greenshields added to his earlier try with a double soon after the break.

Castleford hit back through Nick Youngquest, Grant Millington and Richard Owen, but Blanch had the final word as the Dragons achieved their biggest score of the season.

And with a home game against Bradford Bulls next weekend, they now have an excellent chance of making the qualifying play-offs.

It was a game of farewells for Castleford with Hudson, Youngquest and Jones all making their final home appearances for the club.

Hopes of a winning send-off soon evaporated, however, as Sa put Duport through a gap in the Tigers' defensive line for the opening touchdown and Blanch rounded off a five-man move from their own 20-metre line by going over in the corner.

Hudson ran on to Danny Orr's grubber kick to reduce the deficit but Castleford lost Jamie Ellis with an arm injury and Sa, Greenshields and Blanch added further touchdowns for the visitors before the interval.

With Scott Dureau in excellent kicking form - landing seven goals in total - the Dragons opened up a 40-12 lead as Greenshields scored from Thomas Bosc's inside pass and supported Duport's break for his third.

With reigning Man of Steel Rangi Chase in the thick of the action, the Tigers roused themselves and after Orr and Hudson combined to send Youngquest in, Chase himself created a touchdown for Millington.

Their fifth try came courtesy of Owen with four minutes left but Blanch hurtled down the touchline to complete his treble, leaving Dureau to add the kick in the game's final action.

"It was probably a reflection on our season today. We created opportunities but came up with some errors.

"We lost two players very early in the game when Jamie Ellis dislocated his shoulder and Steve Nash got a quite horrendous head injury.

"I've got to take my hat off to the players for the way they tried very hard in the second half. We were trying some things in attack which I was looking to the future with and we got 20-something points out of it so there are some positives there."

"There was some good stuff but we lacked consistency in the game. That was the negative part, we fluctuated in our control of the game.

"Everyone talks about building momentum going into the play-offs and it does make a difference.

"We have come through a bit of rough patch and we need to have a really good performance against Bradford next week."