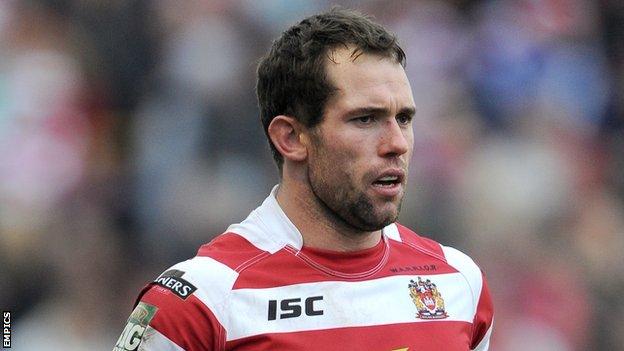 Wigan pulled off the greatest comeback in Super League history to beat Hull KR and win the League Leaders' Shield.

Rovers led 26-0 as Craig Hall, Lincoln Withers, Ben Galea and Jake Webster crossed, but Brett Finch and Darrell Goulding made it 26-12 at the break.

Withers scored after the break but Gareth Hock and Pat Richards went over to pull the score back to 32-22.

The stunning victory, eclipsing their comeback from 30-6 down to beat Bradford in the 2007 play-offs, clinched a first piece of silverware for Shaun Wane as Wigan coach.

It leaves Hull KR unlikely to reach the play-offs.

The result that seemed far from possible in the first half as Warriors were forced into numerous mistakes by their hosts.

Wigan did not get a point on the board until Finch's 37th-minute try but they managed to close the gap to 14 points at half-time.

The hosts stretched their lead to 20 points as Michael Dobson's kick through was grounded by Withers under the posts, with the former adding the conversion - one of his six successful kicks.

But, from then on, Hodgson's try aside, it was one-way traffic with Warriors rampant in their quest for the League Leaders' Shield.

Richards twice went over, to add to his 10 points with the boot, while Hock, Carmont, Farrell and Charnley also crossed to complete a famous comeback.

"There were times when I thought we needed to change things quickly.

"Messages were sent out onto the pitch and Tommy Leuluai helped change the game our way.

"What I do have is great team spirit with a never-say-die attitude with the senior players that rubbed off on the junior players.

"I'm really pleased because I really wanted to win this game. As it turned out, we won it although not in the way I would have liked."

"Our defence was disappointing at times but, after 35 minutes, I wouldn't have said that.

"Unfortunately that has been the story of our season. All week we have been talking about the last five minutes of halves and we let them get 12 points.

"They capitalised on some errors on tackle one. You can't make errors against these top sides. We did and we paid the price."