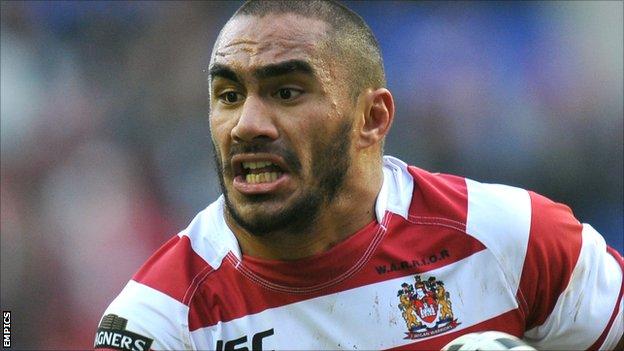 Scrum-half Thomas Leuluai feared he had played his last game for Wigan Warriors after breaking his leg whilst playing for the Exiles against England in June.

The New Zealand international is due to leave Wigan at the end of the season.

"Straight after the Exiles game, when I had the scan and they said there was a break there, I thought that might be it for me," he told BBC Radio Manchester.

"Luckily it was a clean break, they said I would be out for 12 weeks, I've come back after 11 so I'm happy.

"I've pushed it pretty fine. I'm back a week earlier than I should have been. It was important to get as much time under my belt as I could before the play-offs start."

And Leuluai, who is now hopeful of playing a full 80 minutes in the final fixture of the regular season against St Helens on Friday, was pleased to play his part as Wigan collected their first trophy under head coach Shaun Wane.

He continued: "After the season we've had, we would have been disappointed if we hadn't won it.

"We've been fairly dominant for most of the season and we've played well."