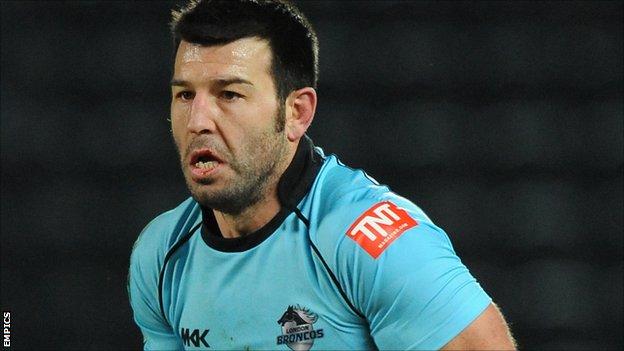 Both sides scored eight tries apiece, including braces for Michael Robertson and Kieran Dixon for Broncos and Michael Dobson for Rovers.

Omari Caro, Craig Bailey, Olsi Krasniqi and Luke Dorn added the other tries for Broncos, who should avoid bottom spot.

Galea, who has postponed his retirement but was still making his final appearance in a Rovers shirt, was one of several players on both sides bidding farewell.

The 34-year-old was one of a handful of elder statesmen on show as, with the play-offs now out of reach, coach Craig Sandercock brought Chris Heil, Richard Beaumont and debutant Nick Johnson into the squad.

London's revival under returning coach Tony Rea stalled in last weekend's 30-0 defeat at St Helens but, in the late summer sunshine, the home side showed their desire to avoid the Super League's wooden spoon.

The Broncos made an excellent start when Robertson gathered a chip kick to the corner from Gower to score.

Rea's men then extended their lead when Caro snaffled a risky cut-out-ball from KR full-back Louis Sheriff, sprinting half the length of the field to touch down unopposed.

And there was yet more disappointment for Rovers, who first lost Lincoln Withers to injury and then conceded another try.

Bryant gathered a poor kick from Dobson and, from his pass, England Knights call-up Dixon danced his way down the Hull right to skip in for the home side's third try.

And a fourth try for Bailey on 36 minutes, once again converted by Gower, made it 24-0.

But Rovers responded with two quick tries before the break, Paea crashing over before Dobson teed up Beaumont for the Robins' second try.

With Dobson kicking both goals, that halved the deficit to 24-12 at the break, but Rovers' response was short-lived.

Almost straight from the restart, Dixon touched down his second of the afternoon and only fierce defence stopped Caro from adding to the tally.

The pendulum swung back the Robins' way when Dobson and Hall combined to set up a try for Petersen, but the Broncos roared back with a score of their own.

Gower's chip kick went to the corner, Dorn gathered and slipped an inside ball to Robertson who strolled in to complete his brace.

Heil grabbed his first try in Super League, with fellow centre Graham Horne at the heart of the score, before Mika used his power from close in to further reduce the deficit.

Krasniqi's close-range drive then looked to end the Rovers resistance, but there was still time for Galea to mark his final outing with a late score.

A flurry of tries with the hooter nearing from Dobson, Dorn and then the Rovers half-back again added to the tension. But Gower remained cool with all of his kicks to keep the deficit within a converted score.

"I thought both teams were in a strange position going into the game as there was nothing really riding on it.

"But we had some big performances out there from the likes of Mark Bryant and Kieran Dixon continues to do some wonderful things."

"Any loss is disappointing and this is no different. I thought in the first half it looked as though we were playing a training session.

"It always looked as though it could be a high-scoring game due to the weather but I did not expect that.

"I knew we had some points in us and if we were able to complete our sets we could make it a contest, but we gave ourselves too much to do."