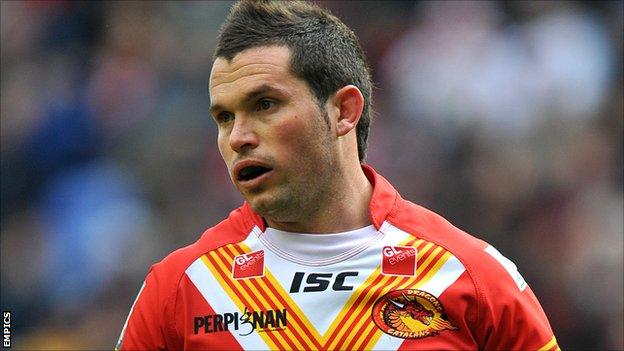 Nine tries, including a treble for the departing Clint Greenshields, were enough to overpower the Bulls, for whom Jarrod Sammut scored four tries.

Michael Platt also scored for Bradford, who trailed only 22-20 at the break.

Dureau also converted six of the eight scores, while Luke Gale responded with three for Bradford.

Catalans' victory, in coach Trent Robinson's last regular season game before joining Sydney Roosters in 2013, sets up a meeting with league leaders Wigan when the play-offs kick off at the DW Stadium this coming Friday night.

Menzies was back in the squad to face his former club, who had lost prop Craig Kopczak before the game following the termination of his contract.

What does victory mean?

But Bradford, beaten 70-6 at home by Hull last weekend, made a great start.

They went in front within two minutes when Platt crashed over before going 10-0 up when Sammut took a tap back from a Gale kick to pop over in the left corner.

The lead was soon wiped out by a trio of Dragons tries, the first from Greenshields, who was eventually judged to have made a clean grounding.

Duport then followed up moments later when he snatched a spilled Dureau bomb before Sa finished off a fine move involving Henderson and Dureau to give Catalans the lead.

Anderson then slipped a string of Bulls tackles to score to the left of the posts.

The visitors replied with their third try of the half when Sammut was in again just before the break, galloping on the outside to collect Keith Lulia's pass.

But the stand-out moment came on the hooter when Sammut completed his hat-trick, collecting his own exquisite chip over the Catalans line.

Despite that try, the Catalans took the initiative after the break when the evergreen Menzies made light of the Perpignan heat to run some 60 metres to score against his former club before Millard maintained his composure to score in the left corner.

Catalans were now in control, Greenshields finishing off a flowing move to the right when he dummied Sammut to slip in for his second.

Dureau, whose kicking has also been key to Catalans, recorded an interception try under the posts to hand himself the easiest of conversions.

Sammut got a fourth, but Greenshields grabbed his hat-trick from Dureau's grubber to take the Dragons up to 50 points and into the play-offs with momentum.

For the Bulls, the likely ratification of their Omar Khan takeover and a place in Super League next season will cushion the blow of missing out on the play-offs for the fourth year in a row.

"Clint was unbelievable out there tonight, We weren't going to lose that game with him on the field today. Obviously things have happened over the last 48 hours that can rock a team, and Clint led the way out there for us. He was turning up, saving and scoring tries and that shows the true character of him.

"I thought our French players held us together, Remi Casty, David Ferriol, Greg Mounis and Jamal Fakir. We had some really strong players.

"The French players were mentally strong today and dug deep. They helped us get over the line."

"It was a poor end today. We had a bright start. We have had a few games like that this season. We came up with 13 errors in the second half, which is poor.

"You cannot give a team like Catalan 13 extra sets in your half if you want a chance of winning the game. The score is a reflection of how the game went.

"We were pretty competitive in the first half but then we fell away with too many unforced errors."