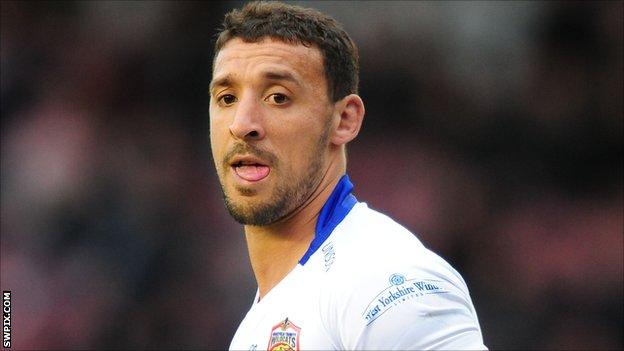 It is the first time in three seasons that the club have made the play-offs.

But Trinity half-back Paul Sykes was the man in form with the boot, landing all of his kicks to set up an elimination play-off trip to Headingley to face local rivals Leeds next Saturday.

There's no better side for winning Grand Finals than Leeds. They're the masters. They know how to get the job done. But there is no pressure on us. We can go there with some confidence

There was a party atmosphere at the unlikely setting of Leigh Sports Village, at least among the Wakefield fans who learned of their play-off qualification before kick-off thanks to Catalans' win against Bradford.

It was a little different for Salford, forced out of their home ground by a clash with new tenants Sale, and without the inspirational Luke Patten, ruled out of a final appearance by injury.

Josh Veivers, another of the five Salford players making farewell appearances, was handed a start at full-back in Patten's absence, while second row Adamson was on the bench.

Wakefield coach Richard Agar took the opportunity to rest former Leeds second rower Ali Lauitiiti ahead of his return to Headingley, after he complained of a migraine before kick-off.

But the Kiwi was hardly needed as a Tim Smith-inspired Wakefield eased to a seven-try victory.

It took 16 minutes to trouble the scoreboard, when Wildcats second-row Mariano scampered on to Sykes' ball to crash over. And, moments later, Raleigh scooped up a slick offload from Tim Smith following Andy Ellis's held-up drive.

Collis then wriggled through a brace of tackles after a sweeping move to claim a third try, Sykes adding his third kick to put Trinity 18-0 up.

Just as it looked as though Wakefield were exerting total control, Salford responded with a fine left-to-right move ending with Williams' dive in the corner.

Gleeson followed up with another score, his 11th of the season in his final Reds appearance.

But a controversial try by Johnson just before the half-time hooter, with a shade of double movement, restored the two-try cushion, courtesy of Sykes' fourth successful kick.

Cockayne kicked off the Wakefield celebrations in the second period with the 100th try of his career.

But indiscipline from Wakefield handed Salford a penalty and, from the resulting set, Holdsworth fed Anderson who ripped through Lee Smith's tackle to score.

It was then Salford's turn to concede a costly penalty, Wakefield taking advantage when Fox took Collis's ball out wide to skid in at the corner.

Lee Smith then added his name to the scoresheet, to crown Wakefield's play-off place by topping 40 points.

Three late tries, two for Gibson, one for Ashurst, gave the 'home' support something to cheer at the end of a tough campaign.

That did not make Agar very happy but, having already accounted for reigning champions Leeds once during this winning run, the Wakefield coach believes his team can pull off a shock at Headingley.

"There was a spell in the first half when, for 10 sets, we didn't have the ball and that's probably what killed us.

"That put us 18-0 down and the one on half-time was probably even more crucial.

"We're desperate to rebuild. There's some bodies that we need to bring in. We're losing our one, six and seven and that's the spine of your team."

"It feels great. We said our season starts again from tonight and I thought our first-half performance reflected that. We went out and did a really good job on them.

"To concede like we did at the end was incredibly disappointing and it's taken the shine off a real solid and competent display. There are some individuals who have really let the team down in the last 10 minutes. I thought they were extremely soft.

"There's no better side for winning Grand Finals than Leeds. They're the masters. They know how to get the job done. But there is no pressure on us. We can go there with some confidence, knowing we've had a couple of really good games with them already this year."