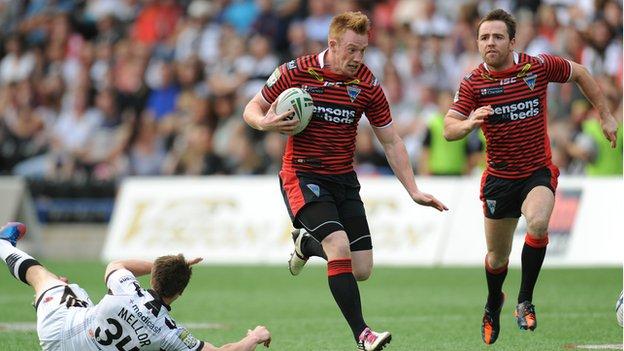 Warrington warmed up for next weekend's Super League play-off clash against St Helens by destroying their other Merseyside neighbours Widnes.

Chris Riley and Mickey Higham both registered a brace as the rampant Challenge Cup winners clocked up 10 tries for the second match running.

Weakened Warrington were without six of their Challenge Cup final-winning side - Joel and Michael Monaghan, Trent Waterhouse, Ben Westwood, Brett Hodgson and skipper Adrian Morley - ahead of next Saturday's qualification play-off opener against Saints at the Halliwell Jones (15 September, 1800 BST).

But Widnes could not cash in like they did when Wigan rested players at the Halton Stadium earlier in the season.

They led through an early Winterstein try but rampant Warrington rallied to lead 22-6 at the break.

And the Vikings' 21st defeat of a disappointing campaign confirmed that they finish bottom in their first season back in Super League.

The only downside for Warrington coach Tony Smith was that his side have a couple of new injury worries over Stefan Ratchford and Ben Harrison for next weekend.

Smith also revealed that Solomona, who kicked the final conversion, will be leaving at the end of the season.

"If you had said in mid-season we would win six games we would have taken that. We have to build on this season and aim to be more consistent in future.

"We saw some dumb stuff. We missed a couple of opportunities and the scoreline was blown out in favour of an exceptional side, who are relentless.

"But all the players worked hard. The fans have seen effort in spades this season and have had value for money."

"There are a couple of concerns with knees and ligaments but I hope they won't prove too serious.

"It was a scrappy game with plenty of errors. It wasn't the prettiest but we got the job done. Both teams chanced their arm and played a bit different to normal.

"Widnes were very spirited and were prepared to die on their feet rather than live on their knees. We had to dig deep and were a little bit ragged but are ready to step up next week."