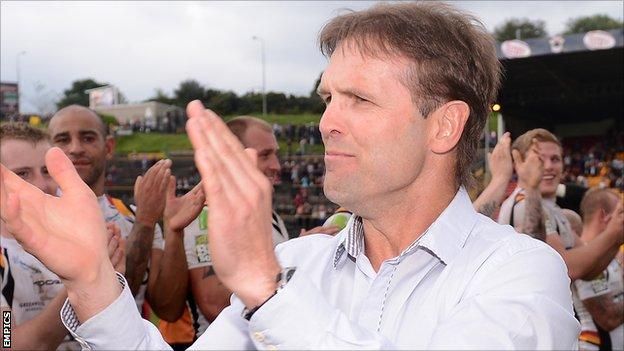 Bradford Bulls coach Mick Potter has distanced himself from a return to Catalan Dragons to succeed Sydney Roosters-bound Trent Robinson in 2013.

Potter, who led the Dragons to the 2007 Challenge Cup final, is unsure of his future at Odsal following the takeover of the Bulls by Omar Khan's consortium.

"I think that is a chapter of my life that has gone and both the club and and I need to look to the future."

Coincidentally, Bradford's final game of the season came at the Stade Gilbert Brutus, where their play-off hopes were ended by a 50-26 defeat.

"It was a poor end today. We had a bright start. We have had a few games like that this season. We came up with 13 errors in the second half, which is poor," added Potter.

"You cannot give a team like Catalan 13 extra sets in your half if you want a chance of winning the game. The score is a reflection of how the game went.

"We were pretty competitive in the first half but then we fell away with too many unforced errors."