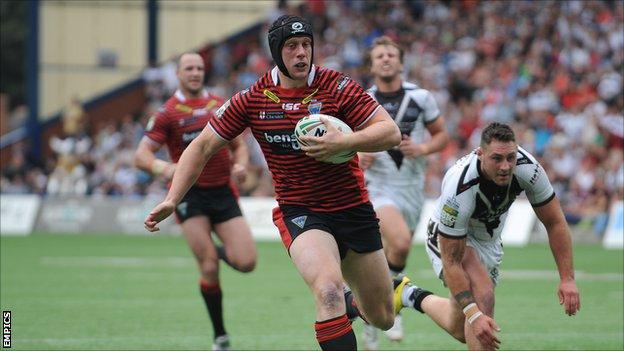 Chris Hill admits he has been surprised by the accolades he has received during his first year at Warrington.

Hill, who was was named in Super League's Dream Team on Monday, to cap a superb debut season with the Wire.

The 24-year-old prop told BBC Radio Merseyside: "It's been a bit of a blur, but a really good blur. I couldn't have written a better script."

The victors will progress directly to the semi-finals, while the losers will get another chance to make it through to the last four.

"Whether we'd have got Saints or Catalans, it would have been tough," said Hill. "Both sides will look at it as a knockout game because you'll get a lot of momentum if you win."

The Wire, who finished second behind Wigan at the end of the regular season, are looking to add the Super League title to the

Becoming the first team since 2006 to win the double would cap a wonderful year for Hill, who said that he did not expect to make such an impact.

"I always set myself big targets and I wanted to play every week.

"But I knew that was going to be tough at a club like Warrington, especially with the strength of the squad here.

"It was a matter of learning and taking my chance when I could. I'm my own biggest critic and I always see that there's room for improvement."