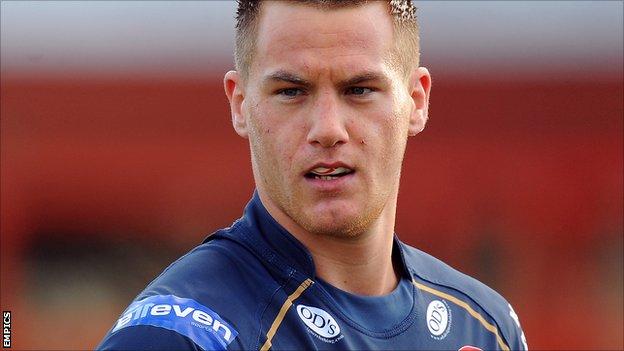 The final of the weekend's four play-off fixtures pitted the teams that had finished sixth and seventh in the table after 27 punishing Super League matches.

Hull had registered 106 points in victories over Bradford and Castleford in their last two games and they continued their thirst for tries, scoring twice in the first 15 minutes.

A knock-on from Brett Ferres gave Hull a scrum 15 metres from the Giants line, and the hosts capitalised in clinical fashion.

They worked an overlap on the left flank and winger Briscoe crossed unchallenged, Foster kicking the extra two points from the touchline, before he acrobatically added a second in the corner.

Huddersfield lacked creativity in the first half, despite the best efforts of Crabtree and newly-appointed captain Danny Brough, while their penalty and error counts rose steeply throughout the opening 40 minutes.

Trailing 12-0 at the break, Giants needed a massive improvement to get themselves back into the contest and in with a chance of extending their season by another week.

But, with the half-time team-talk of coach Paul Anderson still ringing in their ears, the visitors made the worst possible start.

Foster, who has appeared in the last two Grand Finals for St Helens, received a pass from Jordan Turner to race 40 metres before touching down just 37 seconds after the restart.

And Foster rounded off a neat passing move to add his second and his team's fourth try of the evening.

Foster's successful kick, his fourth of the night, took him past 100 points for the Black and Whites since joining them on loan from Saints in July.

He then turned provider, setting up hooker Heremaia, who was able to coast over for his fourth try in four matches.

Crabtree's performance was a rare highlight for Huddersfield and he got the try his individual display deserved, charging clear of the Hull defence to cross for his side's first points.

And Grix made it two in two minutes for the Giants, finishing off a move involving darting runs from Luke George and Ferres.

But, fittingly, it was a dominant Hull who rounded off the scoring with two more tries of their own.

Home skipper Lynch barged past three tackles to touch down under the posts, and then Horne got his name on the scoresheet after Martin Aspinwall had broken the Huddersfield line.

"We're not here to make the numbers up. Every semi-final series has a dark horse. Maybe it is us.

"We don't consider ourselves to be a dark horse. We're one of six teams left now. There were four games to go, now there's three.

"I'm a lot more confident than I was last week. I know what my players are capable of. When we play as a team we are very good."

"We just didn't perform. The most physical, the most aggressive and the best team won. Sometimes we just stood there and watched them.

"We were constantly coming off our try-line. The amount of defence we had to do on the back of the errors they forced took its toll.