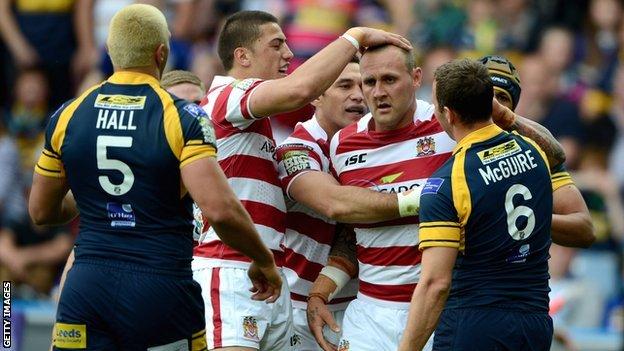 The Warriors, who finished top of Super League in the regular season, had the choice under the 'ClubCall' system.

The other qualifying play-off winners, St Helens, will face Warrington Wolves, who had been Wigan's other option.

The qualifying semi-finals will take place on the weekend of 28-29 September, with Wigan and St Helens both having home advantage.

The winners will meet in the Grand Final at Old Trafford on 6 October.

Wigan have already done the double over Leeds in the regular season, but lost to them in the Challenge Cup semi-finals, and will have the chance for revenge on Friday at the DW Stadium.

Leeds coach Brian McDermott said: "It [the cup semi-final] may count more for Wigan in terms of motivation but we won't read much into it.

"They beat us twice in the league and it wasn't a great day for us at home when they put 50 points past us."

In Saturday's second semi, Challenge Cup winners Warrington will travel to Langtree Park for a quick rematch against Saints, who beat them 28-6 in the first round of the play-offs.