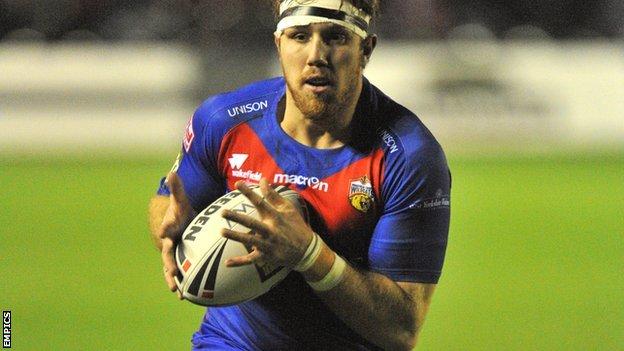 Hull FC have continued their recruitment for next season by signing Wakefield Trinity Wildcats prop forward Paul Johnson on a two-year contract.

The 24-year-old, who was named the 2011 players' and coaches' player of the year at Wildcats, becomes the Black and Whites' eighth signing for next term.

"Hull FC is one of the biggest clubs in the game and I'm really excited," he told the club's official website.

"Hull have had a good year and have added quality players for next season."

Johnson, who has made almost 50 Super League appearances since making his debut for St Helens in 2010 before moving to Wakefield the following year, will join up with new recruits Jason Crookes, Gareth Ellis, Ben Galea and Daniel Holdsworth, amongst others.

"Whenever you play rugby, you want to win and be the best you can and I'm sure I can do that at Hull FC. With the squad that Peter [Gentle] is putting together, hopefully we'll be pushing for silverware in the next few years," he continued.

Hull head coach Gentle was aware that Johnson lead Wakefield's statistics for fewest missed tackles, errors and penalties this season and was keen to get him on board.

"We're really pleased to have secured a deal for Paul, a player who has impressed throughout this season with his no-nonsense, committed approach to the game," Gentle said.

"He can play big minutes if required and his performances over the last couple of seasons at Wakefield will show everyone his pedigree and exactly why we wanted to bring him to the KC Stadium."

Ellis joined Richard Agar's side for the start of the 2012 season and featured 10 times.