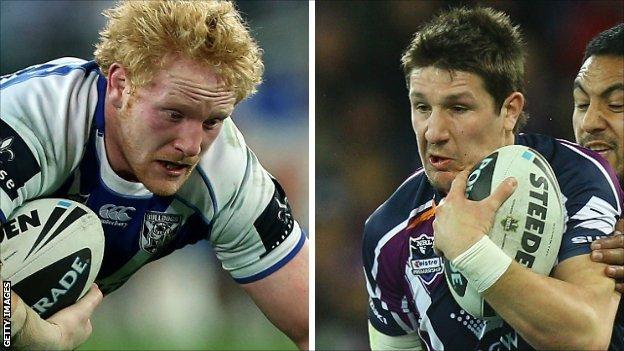 Australian rugby league's showpiece event will feature two English players for the first time since the trio of Malcolm Reilly, Tommy Bishop and Cliff Watson met in the 1973 fixture between Cronulla and Manly, while the winner will join a 10-strong list of players to achieve success.

"There's been a bit of talk that there was one [English player] guaranteed to be in the final," Canterbury's Graham told BBC Sport.

"It can only be a good thing for the game and for England coach Steve McNamara that we're getting some recognition."

English players to have won an Australian Premiership

Victory for the Bulldogs would cap a fine debut season for Graham, 27, who left St Helens for Sydney at the end of 2011.

Graham appeared in six straight Super League finals before heading down under and will make his NRL finals bow at the Bulldogs' own ANZ Stadium home.

"Already the build-up has been pretty full on, we've got security at training to keep the media out and when you turn on the TV or the radio it's all they're talking about," Graham added.

"We knew we would have to be at our best against South Sydney [in the semi] and it was a really good win.

"Melbourne are a quality side, they've had two good wins in the play-offs now and it's going to be a huge ask for us on Sunday."

Melbourne's hopes of upstaging the Bulldogs on home soil will rest on the shoulders of Widdop, Cameron Smith, Cooper Cronk and Billy Slater - all major stars in the NRL.

The 23-year-old half-back, born in Halifax, has played his entire career in Australia but was still an under-20s player the last time the Storm made it to the Premiership final in 2009.

However this time the England 'five-eighth' is a regular fixture in Craig Bellamy's side and in the frame for a first shot at a Premiership medal.

"It doesn't really get much bigger than an NRL Grand Final, running out in front of 80,000 people," Widdop said.

"The build up is huge in the papers and on TV. It's a big occasion, I guess like the FA Cup final back in England.

"It's very exciting and I'm really looking forward to it. And, in regards to pressure, I don't really feel much as it's just very exciting times more than anything.

"This would definitely be up there with the biggest game of my career. It's a massive opportunity ahead of me and one not too many Englishmen have done.

"It's good to have two English boys running around in the Grand Final. We're good mates but I think we will leave the talking until after the game."

Both players retain a link with their homeland through the televised Super League competition, the final of which takes place a week later on Saturday, 6 October at Old Trafford.

However Super League has been criticised by former players such as Ellery Hanley, who played in both his native country and Australia during a distinguished career, for falling behind its southern hemisphere counterpart.

"I don't think we're too far behind. I still tune into Super League and I think it's great to watch," Graham said.

"Like any sport it can improve and should want to improve, and I don't think it's too far behind.

"Look at the recent World Club Challenge matches. Leeds beat Manly last season and the English sides have got so much potential."