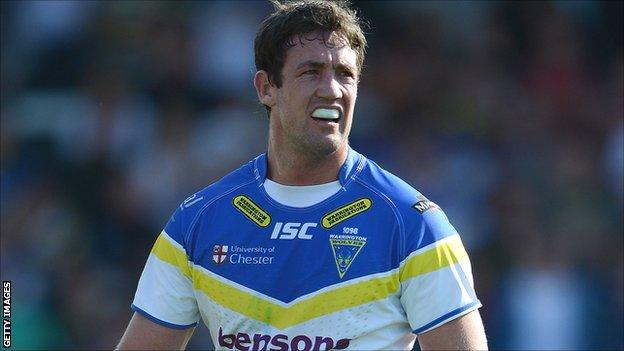 Second row forward Trent Waterhouse has urged Warrington to remain composed as they aim for a place in their first ever Super League Grand Final.

The Wire face St Helens at Langtree Park on Saturday, with a place at Old Trafford on 6 October at stake.

And Waterhouse wants Warrington to learn the lessons of their

Warrington Wolves have lost both home fixtures against St Helens in 2012, but claimed a 22-12 victory at Langtree Park in August

"We came into it a bit anxious. If you do that, you tend to make mistakes," he told BBC Radio Merseyside.

"That's what we did. You've got to stay composed and stay relaxed in those big games.

"We reacted pretty well and but we're going to have to step it up a notch this week."

Australia international Waterhouse, who suffered a broken nose in their last meeting against St Helens, is approaching the end of his first season in Super League.

He spent almost a decade playing for Penrith Panthers in the NRL and is enjoying the experience of rugby league in England.

"They're very vocal fans here, probably a little bit louder than back home," said Waterhouse. "I've loved the atmosphere at the games and I've had a really enjoyable year so far.

"The game is probably a bit more open. They throw the ball around a lot more, which is good. I don't mind it.

"Back home, there's a lot more wrestling and it's a bit more structured. That's the main difference."