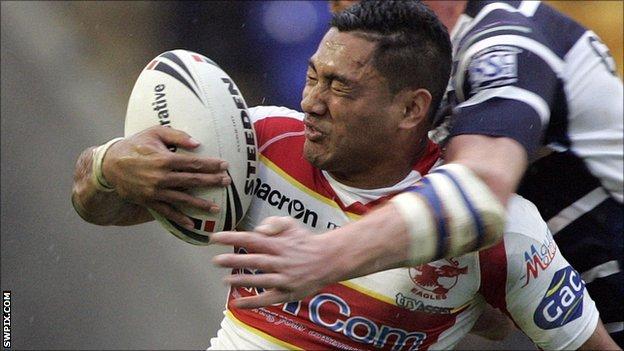 Liam Finn kicked eight points but it was not enough to close the gap.

Victory for the South Yorkshire side was sweet for coach Mark Aston, who won the Challenge Cup with the Eagles in 1998, and has now claimed silverware for the first time since that famous Wembley success.

It was a different story from last season's 40-4 defeat, as the Eagles opened the scoring through Turner after bright work from centre Menzie Yere, but Hardman responded with a try for Rovers, who then went ahead through Finn's brace of goals.

Laulu-Togagae was next to profit from Yere's powerful running, the Championship Dream Team full-back collecting Turner's pass to cap a slick move, and Brown converted to make it 10-8.

After the break Finn landed a penalty for Rovers with shades of Leeds' win at Wigan on Friday night about the tactics, but quickfire tries on both sides from McDonald and Hepworth kept the scores close.

Finn's kicking was proving the difference, but Taulapapa's score pushed the Eagles ahead and Brown's conversion proved sufficient to take honours back to Bramall Lane.