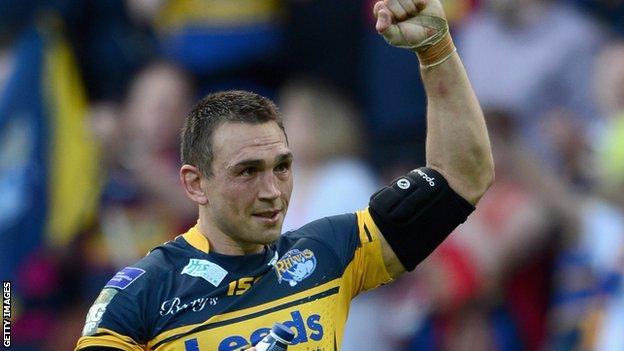 Leeds Rhinos half-back Rob Burrow says he cannot understand how captain Kevin Sinfield is not among the candidates for the Man of Steel award.

Sinfield, 32, was outstanding in the Rhinos' superb play-off win at Wigan on Friday night, leading his side to a fifth Grand Final in six years.

The England international, who made his 400th appearance for Leeds this year, has never been nominated for the award.

Burrow said: "It is unbelievable he has not been mentioned for Man of Steel."

Leeds are expected to be at full strength when they take on Warrington in Saturday's Grand Final. Half-back Danny McGuire returns after being suspended against Wigan.

Sinfield has acknowledged the Rhinos missed McGuire's creativity and penetration against Wigan.

"We were disjointed with the ball at times without Danny in the middle and it did affect us," he said. "But the guys really dug in.

"Wigan are a great team, so to beat them on their own patch is huge for us. The goal was to stay alive for another week and, thankfully, we did that."

It is the second consecutive year Leeds have reached the Grand Final after finishing outside the top three in the regular season. No other team has achieved the feat once.