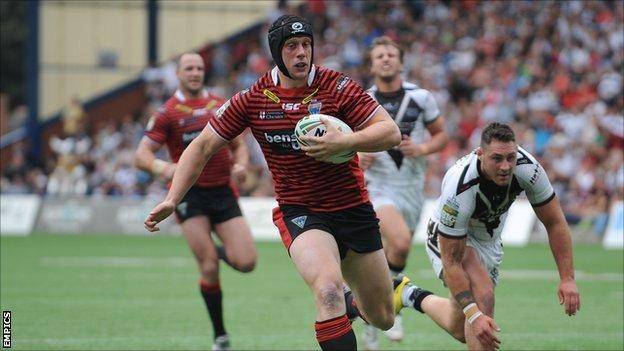 Warrington prop Chris Hill has received his first call-up to the senior England squad for the forthcoming autumn internationals.

Leeds full-back Zak Hardaker is also named in Steve McNamara's 24-man squad for the games against Wales and France.

"I want to see how Chris, along with the other young players, adapts to the rigours of international competition," said McNamara.

"It will be great for their development to be training and playing alongside the likes of Sam Burgess and Kevin Sinfield."

Hardaker, 20, has been named Super League young player of the year after impressing in his first full season with the Rhinos.

Former Leigh Centurions player Hill, 24, has enjoyed a highly successful season after comfortably making the step up from playing part-time in the Championship.

South Sydney's former Bradford forward Burgess, who missed last year's Four Nations series through injury, is one of three Australia-based players called up by McNamara, along with West Tigers player Gareth Ellis, who is returning to Super League with Hull next season, and former St Helens captain James Graham.

Canterbury Bulldogs player Graham is facing a disciplinary hearing in Sydney on Thursday to answer a charge of biting, however, and could be ruled out through suspension.

While Grand Final team Leeds have no less than seven players and Wigan have a further six players in the squad, St Helens have no representation after forward Jon Wilkin was ruled out with shoulder and elbow injuries.

As well as the autumn series, the England squad will embark on a high-altitude training camp to South Africa ahead of the 2013 World Cup.

"This year's international programme, including our camp to South Africa, is all about fine-tuning our preparations ahead of the Rugby League World Cup in just over a year's time," added McNamara.