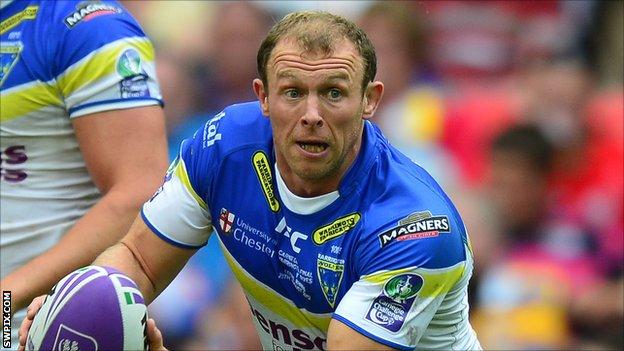 Micky Higham and Kevin Sinfield will meet in Saturday's Grand Final, more than two decades after they played against each other as juniors.

Warrington hooker Higham told BBC Radio Merseyside of his memories of facing the current Leeds captain whilst both were growing up in Greater Manchester.

"My first game against Kev was probably at under-eights or under-10s," he said.

"I've played against and with him for 20 years now. If one player was going to make it, I would have said Kev.

"He had everything as a kid. He had the attitude, the skills, he could kick and he was a big lad as well.

"I played for Lancashire with him. Then when you get a little bit older you move on to your academy clubs, and obviously Kev signed for Leeds."

Former St Helens and Wigan man Higham is set to make his second appearance in a Grand Final, a decade after playing for Saints in their 2002 victory against Bradford Bulls.

"I can remember it like it was last week," he continued. "The game goes so quickly and I don't remember too much about that game, but I remember walking out of the tunnel, the roar, and the hairs on your neck standing up.

"It's a special week of training. The intensity lifts up again and there's a buzz around the place."

Warrington are aiming to become the first side since St Helens in 2006 to win the Challenge Cup and the Super League title in the same season.

The Wire have won the Challenge Cup in three of the last four years, and while Higham believes having experienced the pressure matches will be a help to the younger players in Warrington's squad, playing in a Grand Final will be a completely different experience.

"It's a different feel to Wembley because the stands are a lot closer to the pitch and I think it's a lot louder as well," the 32-year-old added.

"It will be a bit nervy for Warrington because we've never been here before and you could probably count on one hand the lads who have played in a Super League Grand Final.

"But we seem to play on any occasion and we don't tend to let the nerves get to us.

"We enjoy the occasion but we play the game. It's something that's stood us in good stead before."

In their three previous meetings in 2012, Warrington have the edge by two victories to one, and at Wembley in August.