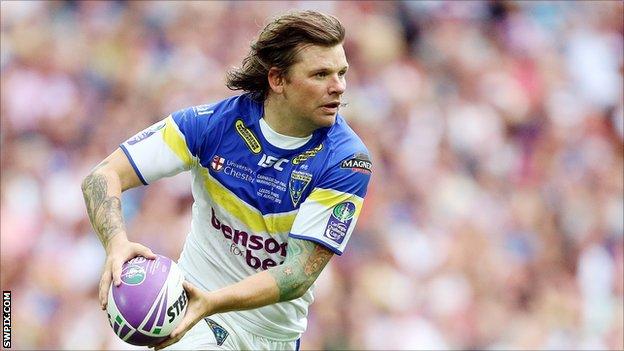 Lee Briers says he has not changed his preparations for Saturday's Grand Final against Leeds - including taking time to coach his junior team.

"I got up on Sunday, realised we were at Old Trafford and then I was out coaching my under-nines team," he said.

"In years gone by, we might have had a few pints to celebrate."

He continued: "Why have them then? We can have them all next week [after the final] and I can have as many as I want.

"It was back to reality and going to coach nine-year-old kids. I loved it because they're all St Helens fans and I could give them a bit of stick."

Former Wales captain Briers is set to make his first appearance in the Old Trafford showpiece, 15 years after making his debut for St Helens.

"You work hard every year to get to here," he continued. "The organisation we've got at Warrington, from the owner to the kit man, is up there with the best.

"Once you get the best people around you, you're going to get success. I've been hanging on in there and finally that day has come. That's what you strive for.

"I'm a winner and to be successful you've got to get to cup finals. That's always been my goal.

"I've never been to a Grand Final, but I've watched them on telly and seen the atmosphere.

"I can see the two teams walking out, I've got that image, but that's as much as I'm going to go to. I don't want to know [about the experience of playing]. I'll experience it for myself."

While Warrington, like Briers, will be appearing in a first ever Grand Final, being part of the biggest occasion in Super League has been a regular occurrence for Leeds.

The Rhinos have won the title in four of the last five years and Briers believes their Old Trafford experience makes them a tougher proposition than their final league position of fifth would suggest.

"They're winning too many play-off games for it to be a one-off," he added. "They know how to play in the play-offs, better than any other team.

"They're so precise and clinical. Kevin Sinfield kicks everybody to death. It was awesome the way he did it