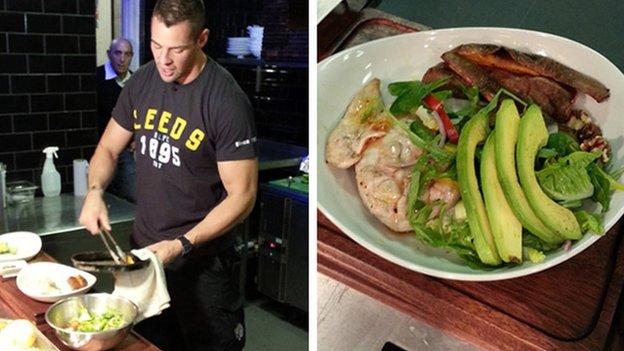 Leeds winger Ryan Hall's preparations for the Super League Grand Final may be hampered after he ate undercooked chicken prepared by a team-mate.

Hall was appearing alongside Ian Kirke at a promotional event on the eve of the game when he ate some food prepared by the 31-year-old Rhinos prop.

Not so healthy pre-match meals

The Rhinos face Warrington in the Grand Final at Old Trafford on Saturday.

Kirke told BBC Radio Leeds he is hopeful Hall will make the game: "He's got a strong stomach, he'll be fine."

He continued: "Ryan eats pretty much anything. He might not feel too well on the way over to Manchester but hopefully he'll be alright.

"It was a bit of a Blue Peter moment to be honest, it got a bit rushed."

The Rhinos have said they are not unduly worried about the situation and expect Hall to be fully fit.

Leeds coach Brian McDermott will be hoping that the England international does not suffer any adverse effects from Kirke's gastronomic faux pas.

Hall, 24, has crossed for 26 Super League tries in just 27 matches so far this season to help the Rhinos reach a fifth Grand Final in six years.

For the second year running the Rhinos have taken the hard route to the final after finishing the regular season in fifth place.

They ended Wakefield's eight-match winning run in their first play-off match before beating Catalan Dragons away in Perpignan and surprising Wigan in the semi-final last Friday.

Their opponents on Saturday have also had to battle their way to the Old Trafford showdown.

An opening defeat by local rivals St Helens meant Warrington had to beat Hull FC in a preliminary semi-final before beating the Saints to reach their first ever Grand Final.