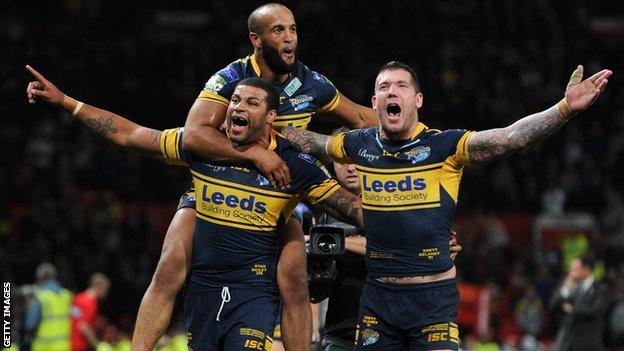 The Rhinos earned a 26-18 win over the Wire on Saturday to retain the Super League title.

"The energy the lads have shown in big games over the last two seasons has been something special," Jones-Buchanan told BBC Yorkshire Sport.

"It's astonishing how we can go out and do it again, it's a real fairytale."

The 31-year-old added: "Even though we haven't been that consistent all the time we've been to every final for the last two years and that shows the attitude these players have."

Team-mate Ian Kirke believes the Rhinos, who have now won back-to-back titles from fifth position in the regular season, thrive on disproving the doubters.

En route to Old Trafford, Leeds ended Wakefield's eight-match winning run, became only the second side in 2012 to win in Perpignan against Catalan and beat Wigan, who topped the league, in the semi-final.

"Even people close to me have said 'surely you can't do that again' and I've always just responded 'why?'

"We've done it the hard way but I think that makes you a bit sharper and more battle-hardened when you reach the final.

"It would be nice to win the Grand Final from first because it would mean we've been the best side all season but if we have to do it from eighth then we will."