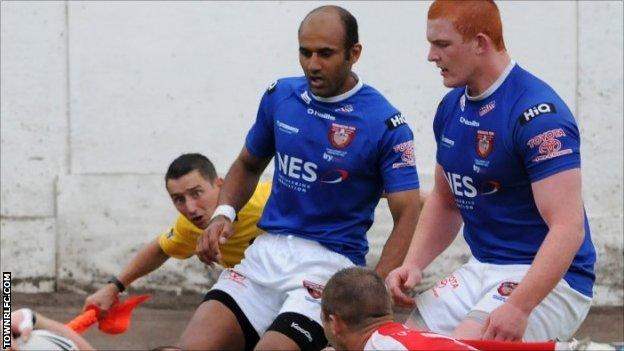 Former Salford City Reds three-quarter Andy Morris is yet to show his best form in Workington Town colours, according to coach Gary Charlton.

Morris, 19, joined from the Super League side on Monday, after making three appearances for Town last season.

"He's a big strong lad who plays in the centre and can play some rugby," Charlton told BBC Radio Cumbria.

"He's got good defence, runs on to the ball well, but I don't think we've seen the best of him yet."

Town, who won promotion through their top four league placing, lost to Doncaster in their eliminator semi-final - denying the club a Grand Final place.

However Charlton is now pushing to add to the squad for the Championship campaign ahead, and has signed up key players such as Jamie Rooney, Jarrad Stack and Graeme Mattinson.

"You want to pick up the players who can do a job for us and we're working on that," he added.

"It takes time, it doesn't happen overnight and we've got to bring the right players in to improve the squad.

"It helps if you get everybody on board that you want early, but players become available right through until the kick-off so we'll try to put 90% of it together and pick a couple of other players later on."