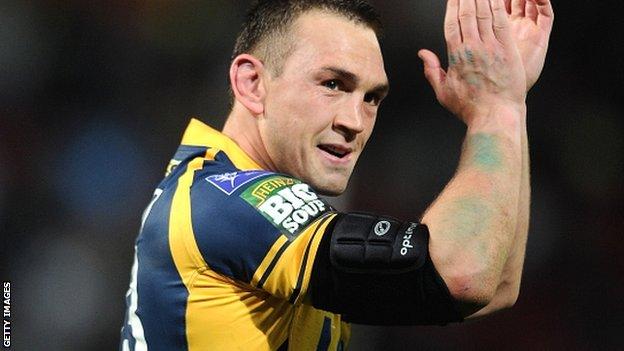 Leeds skipper Kevin Sinfield has been named as the new England captain.

The 32-year-old, who led his club to a sixth Super League Grand Final last week, made his England debut in 2000 and succeeds Jamie Peacock, who retired from international rugby last summer.

The England team are currently at a high altitude training camp in Africa in preparation for the autumn series against France and Wales.

In 2008, he set a club record by scoring in 63 consecutive matches and this year celebrated his 3,000th point for the Yorkshire side.

"I am immensely honoured to captain England Rugby League," he said.

"Representing your country is always special, but to captain England will be the proudest moment of my career to date.

"There could have been a number of candidates for the job, when you look at the number of leaders we have in the squad, but Steve McNamara has asked me take up the role and I will do it to the best of my ability.

England's opening match in the autumn series is against Wales at the Glyndwr University Racecourse Ground in Wrexham on 27 October.

They then host France at MS3 Craven Park in Hull a week later.