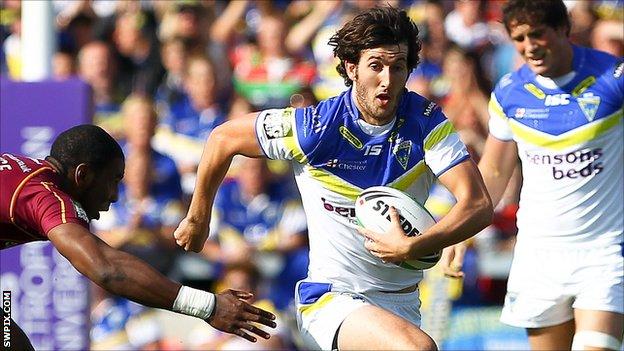 Stefan Ratchford says his first season with Warrington Wolves has gone better than he could have imagined, despite missing out on a Grand Final victory.

He told BBC North West Sport: "We were unlucky not to win the League Leaders' Shield. We won the Challenge Cup and got to the Super League Grand Final.

"It's been a great first year, probably more than I could have asked for."

He continued: "The only thing that could have topped it was the victory in the Grand Final. We'll come back stronger next year and hopefully go one better."

Ratchford, who has been used in a variety of roles by Warrington coach Tony Smith this season, at the start of the campaign.

But it was a far from ideal start to his career at the Halliwell Jones Stadium. A shoulder injury suffered in his sixth appearance at Leeds which put him out of action for more than two months.

On his he helped the Wolves to and a first Grand Final in Warrington's history earlier this month.

meant the season ended on a slightly disappointing note, although Ratchford believes every player in the squad will have taken something from the experience.

"I don't think it's just the younger lads - a lot of the senior boys will benefit as well," he said. "It was the first Grand Final for the club and for a lot of the players.

"The staff and everyone involved with the club will benefit. The experience that we've had is only going to drive us on to come back next year.

"I think there's only a couple of lads leaving. Big Dave Solomona is going, but the majority of the squad are sticking together. We can only benefit from that and go one better next year."