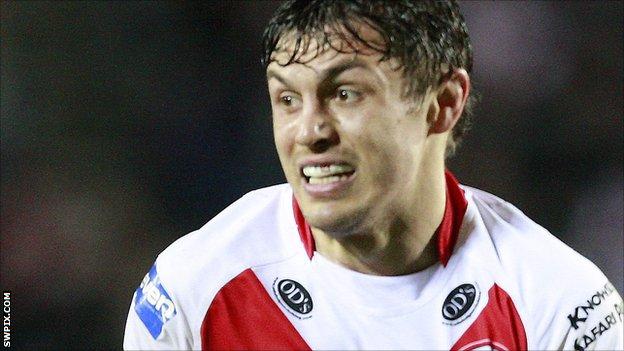 Jon Wilkin thinks St Helens will remain a force in Super League after moving to a new stadium earlier this year.

For the first time since 2005, Saints were not involved in the Grand Final.

But Wilkin says the 2012 season must be judged as a success, purely because of how well the club coped with the

A new beginning for St Helens

"If we had stayed at Knowsley Road, it wouldn't exist in a number of years' time. That's the simple fact," the forward told BBC Radio Merseyside.

"The club would have financially died a death. Moving to Langtree Park had to be done.

"Everybody who has invested in the club, not just the current board but in the years gone by, really deserves the credit for taking such a tough decision but to take the club into the future and make the club a profitable business.

"Ultimately, if it's not making money, the club we all love - I love to play for, the fans love to support, you love to report on - would not exist, so from that perspective, it's been a fantastically successful year."

St Helens had a good record at Langtree Park in 2012, winning nine and losing four of their 13 Super League fixtures during the regular season, although it was the scene of their

England international Wilkin is confident Saints' new home, which has a capacity of 18,000, will become just as hostile a place for opposing teams to visit as Knowsley Road had once been.

"It takes time," he said. "I don't think it's something you can achieve overnight.

"You play every team there once, so in the memory banks of every side is one game at Langtree Park.

"We need to build that up over three or four games against a team. All of a sudden, teams have perhaps not won in those four games, and then you start to reap the benefits of home advantage."

A poor start to the campaign as head coach, with Mike Rush and Keiron Cunningham taking control of first team affairs.

The pair guided Saints to third position in Super League and within 80 minutes of the Grand Final.

has already started rebuilding his squad for next season, with Hull FC duo and among their new additions for 2013.

"League form very rarely lies about where you're at and I think Wigan and Warrington had been the best sides all year," continued Wilkin.

"We were probably the third best side and that's something we've got to change. We go into next year full of confidence and with some great recruits.

"We go into every year to win trophy. Not every team can win a trophy and our job is to use the hunger of not winning anything this year to motivate us next season."